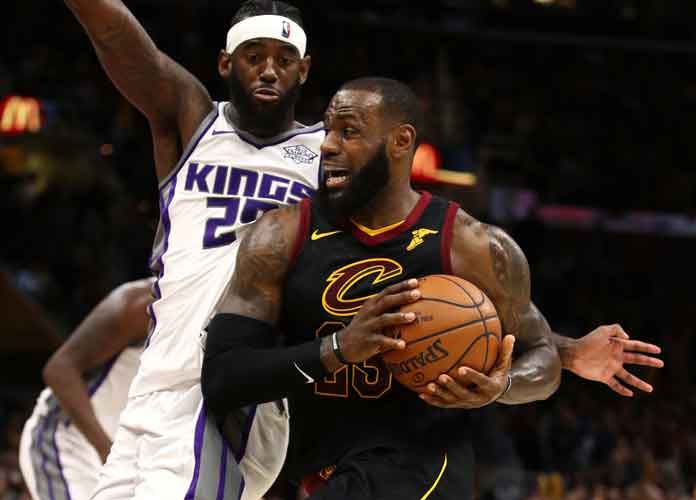 LeBron James finished with 32 points, 11 rebounds and nine assists to help lead the Cleveland Cavaliers to their franchise record-tying 13th consecutive victory on Wednesday night, a 101-95 win over the Sacramento Kings.

James — who sank a big 3-pointer with 15 seconds remaining — changed his sneakers three times. The fifteenth-year NBA veteran was on each of the two previous Cavs squads that won 13 straight games, in 2009 and 2010. On Wednesday, he helped Cleveland rally from a 14-point deficit in the third quarter to remain undefeated since Nov. 11.

His decisive 3-pointer in the last minute over JaKarr Sampson came after James went to the bench during a timeout and requested coach Tyronn Lue run a play for him.

The “Chicago” play is named after a game-winning shot James once scored in the playoffs to defeat the Bulls.

”It felt good,” said James, who finished 12 of 18 from the floor. ”I was able to get the laces where I wanted them and I got enough space, I created enough space with the step-back away from JaKarr and I was able to let it go. It felt good the whole time.”

The Cavaliers will have a chance to break their record with 14 victories if they win on Friday at Indiana.

Zach Randolph had 18 points and 10 rebounds and Buddy Hield added 17 points for the Kings. Sampson grabbed 16 rebounds in his first start this season.

Although the Cavs’ unbeaten streak is amazing, James says he is hoping the team can double it.

“Twenty-five,” he said when asked what number the streak should reach before it can be regarded as special. “Because you’re getting close to 33 (Lakers 1971-72), that’s the all-time record. We ain’t nowhere near close. We got close in Miami. We got to 27 and lost to Chicago.”

Cleveland guard Derrick Rose, meanwhile, has returned to the team from a self-imposed hiatus. Rose has been dealing with a sprained ankle, and the 2011 NBA MVP’s latest injury has been one of his largest.

The Kings next wrap up a four-game trip at New Orleans on Friday.

CLEVELAND, OH – DECEMBER 06: LeBron James #23 of the Cleveland Cavaliers drives past JaKarr Sampson #29 of the Sacramento Kings during the second half at Quicken Loans Arena on December 6, 2017 in Cleveland, Ohio. Cleveland won the game 101-95. (Photo by Gregory Shamus/Getty Images)