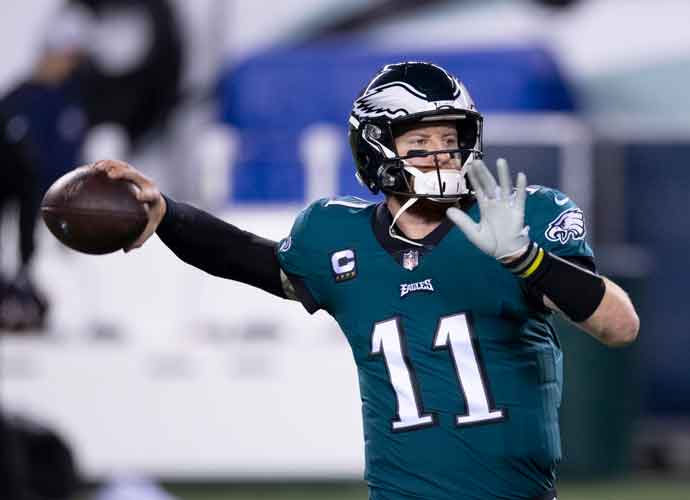 PHILADELPHIA, PA – NOVEMBER 30: Carson Wentz #11 of the Philadelphia Eagles warms up prior to the game against the Seattle Seahawks at Lincoln Financial Field on November 30, 2020 in Philadelphia, Pennsylvania. (Photo by Mitchell Leff/Getty Images)

Wentz had initially held hopes of only resting and rehabbing his foot injury instead of surgery. Wentz wanted to have the possibility to play in the team’s season opener against the Seattle Seahawks. That is no longer the case as he will undergo surgery.

Wentz participated in two training camps with the team but was held off from the third training session on Friday with a foot injury. Offensive coordinator Marcus Brady noted that Wentz felt a “twinge in his foot” when he rolled out and planted to throw late in Thursday’s practice. But doctors examining the quarterback said that surgery was necessary.

Reich said it’s an old injury, possibly from high school. The foot injury was a broken bone that came loose in Wentz’s foot.

The Colts acquired Wentz during the offseason and reunited him with Reich by giving the Philadelphia Eagles a third-round pick in this year’s draft and a conditional second-round pick in the 2022 draft.

The 28-year-old had wanted to use his time in Indianapolis to revive his career. Last season, with the Eagles, Wentz had one of the worst performances of his career. In 12 games, he was sacked 50 times, threw 12 touchdowns and 15 interceptions. Philadelphia then benched him in favor of Jalen Hurts.

“The job is Jacob’s right now,” Reich told reporters, referring to second-year quarterback Jacob Eason. “He has to prove it, he knows that. Jacob’s in the driver’s seat.” Eason will continue to receive first-team reps with the possibility of starting with Wentz sidelined.