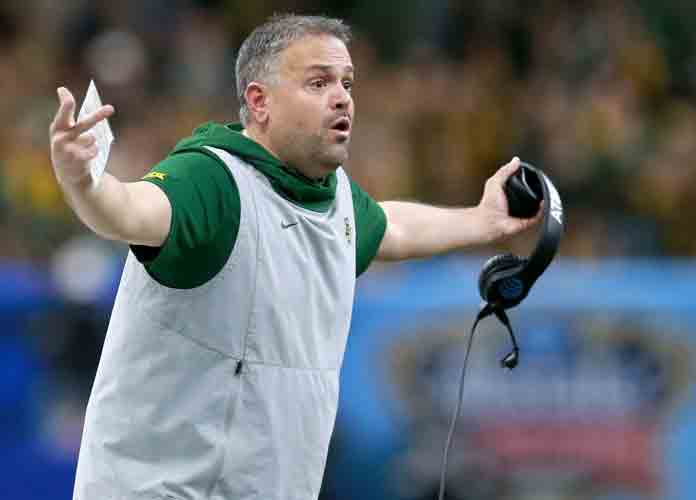 NEW ORLEANS, LOUISIANA - JANUARY 01: Head coach Matt Rhule of the Baylor Bears looks on during the Allstate Sugar Bowl against the Georgia Bulldogs at Mercedes Benz Superdome on January 01, 2020 in New Orleans, Louisiana.

The Carolina Panthers have fired Matt Rhule after spending just over two seasons with the team as head coach.

The Panthers announced that Steve Wilks will serve as the interim head coach going forward.

#Panthers run game coordinator Al Holcomb is expected to be the new defensive coordinator, per me and @MikeGarafolo. https://t.co/M6CNlxXGcg

The move to fire Rhule and a major part of his staff comes after the team started 1-4 this year.

That leaves the 47-year-old with just an 11-27 record since becoming the head coach in January 2020.

Fans and the organization have been frustrated with the lack of winning, as Rhule’s hiring came with a whopping seven-year $62 million contract.

Panthers’ QB Baker Mayfield is expected to be sidelined “at least a couple weeks” with his sprained ankle, per source. But Mayfield also getting additional medical opinions to help make best determination.

Although he has struggled this year, the Panthers will have to turn to third-stringer P.J. Walker.

Sam Darnold, the Panthers starting QB for the bulk of last season, is out with a high ankle sprain of his own.

The 27-year-old made an appearance on Sunday, throwing for 60 yards and completing 83% of his passes.

In 10 games with the Panthers, Walker has thrown for a total of 790 yards.

Next up, the question is if he will go back to coaching college football or get another job in NFL.

In his last season with the Baylor Bears, Rhule went 11-3.

He also said that the Panthers will only need to pay Rhule’s salary for this year only.

Rhule is still owed $40 million and will get all of it still.

“The salaries for the ensuing seasons are offset by what his future college job pays him,” Ian Rapport tweeted.

And it remains to be seen if the coaching shake-up will turn around the team’s losing ways this season.

On a counterpoint, fans and the organization may hope that the losing continues and that team ends up with the first overall pick in the 2023 NFL draft.

That could give them the right to draft one of the following quarterbacks: Bryce Young (Alabama) or C.J. Stroud (Ohio State).

Next week, the Panthers face off against the Los Angeles Rams.

Read more about:
Baker Mayfield Carolina Panthers Matt Rhule
Listen to the uInterview Podcast!
Get the most-revealing celebrity conversations with the uInterview podcast!