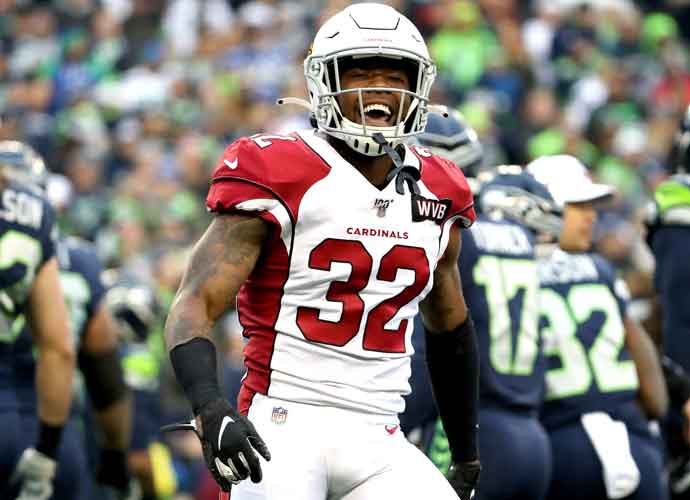 SEATTLE, WASHINGTON - DECEMBER 22: Strong safety Budda Baker #32 of the Arizona Cardinals celebrates after a defensive stop against the Seattle Seahawks during the game at CenturyLink Field on December 22, 2019 in Seattle, Washington. (Image: Getty)

Following an absolutely brutal hit in the final game of the NFL’s Super Wild Card weekend, Cardinals safety Budda Baker was placed on a stretcher and carted off the field.

He’s said to have feeling in all extremities but did suffer a concussion after the hard collision with recently returned Rams running back Cam Akers. He was alert and communicating en route to the hospital.

Initial injury update on Budda Baker – concussion and will not return

Did have movement & feeling in all extremities as he left field

Taken to hospital for further evaluation

The hit came in the third quarter of Monday night’s game, as Baker rushed in at the end of an 11-yard run by Akers to try and make a tackle.

The defensive back’s head connected with the running back’s shoulder, and Baker wasn’t moving immediately after the collision.

He rolled onto his back but was able to move his arms as he was carted off the field.

“Had feeling in everything, so he’s at the hospital being examined now, but seems to be positive news that I’ve got so far,” Cardinals coach Kliff Kingsbury said.

As Baker was treated by medical personnel, both teams took a knee and looked shaken up.

He was second-team All-Pro this year and was voted to his fourth Pro Bowl. He appeared in all 17 games and recorded three interceptions, 98 tackles, and seven passes defensed.