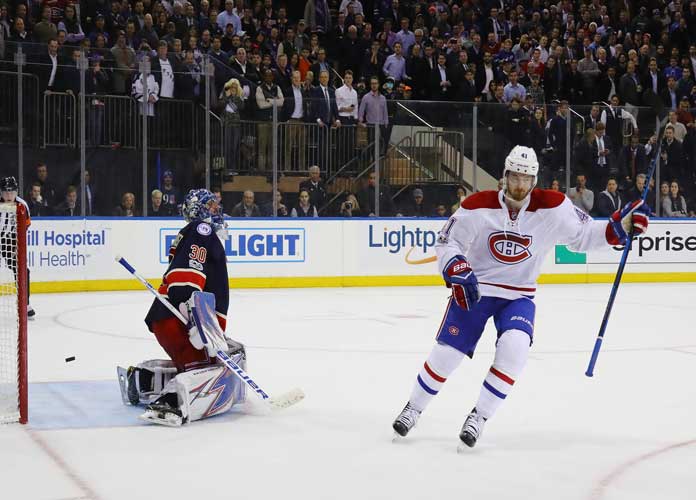 NEW YORK, NY - FEBRUARY 21: Paul Byron #41 of the Montreal Canadiens celebrates his game winning shootout goal against Henrik Lundqvist #30 of the New York Rangers at Madison Square Garden on February 21, 2017 in New York City. The Canadiens defeated the Rangers 3-2 in the shootout.

The Montreal Canadiens were playing in just their second game under new coach Claude Julien on Tuesday, but they managed to secure their first victory with their new leader.

Paul Byron scored the decisive goal in the fifth round of a shootout to lift the Canadiens to a 3-2 win over the New York Rangers at Madison Square Garden on Tuesday night. Alexander Radulov also scored in the shootout.

Julien– who previously coached Montreal from 2003 to 2006 — replaced Michel Therrien on Feb. 14, just seven days after he was fired by the Boston Bruins as head coach.

“Playing the way we did tonight hopefully encourages us to play that way moving on here,” Julien said. “It wasn’t the perfect game, but our compete level was good, and when your compete level is good, you have a chance to win. I thought our guys did a great job of that.”

The Canadiens (32-20-8) had lost three straight games and were 1-6-1 in their past eight as they visited the Garden for the first time since November 2015. The Habs remain in first place in the Atlantic Division, two points ahead of the Ottawa Senators.

New York got game-tying goals from Oscar Lindberg in the first period and Rick Nash in the second. Henrik Lundqvist made 26 saves.

Montreal’s Andrew Shaw opened scoring with a wraparound shot 3:55 into the game, beating Lundqvist on his stick side for his eighth goal of the season.

Lindberg tied it at 10:03 by redirecting lineman Jesper Fast’s pass to the slot past goalie Carey Price, who finished with 28 saves. Among Price’s big stops was a diving save of Ranger J.T. Miller’s shot with 3.7 seconds remaining in overtime.

Canadiens defenseman Shea Weber gave his team a 2-1 lead with a power-play goal at 1:42 of the second period.

New York’s Mats Zuccarello scored in the first round of the shootout, and Radulov tied it in the second round. Price made saves on Derek Stepan, Jimmy Vesey and Miller before Byron finally sealed the win.

“All the stuff we’ve been doing in practice, it’s reinforcing everything the coach is telling us to get a win against a very good Rangers hockey team on the road,” Byron said. “It can give us a lot of confidence.”

In overtime, Lundqvist made a glove save 30 seconds in on Montreal’s Max Pacioretty and then denied him again on a close shot two minutes later.

“Both teams played hard,” Lundqvist said. “We came back twice, so it could have gone either way. It’s always disappointing to come up short, obviously, in a shootout, but that’s the way it went.”

This was the third Rangers home game this season to go to overtime, and first since Dec. 18. All three have ended in a shootout.

The Rangers next visit the Toronto Maple Leafs on Thursday, when the Canadiens host the New York Islanders.