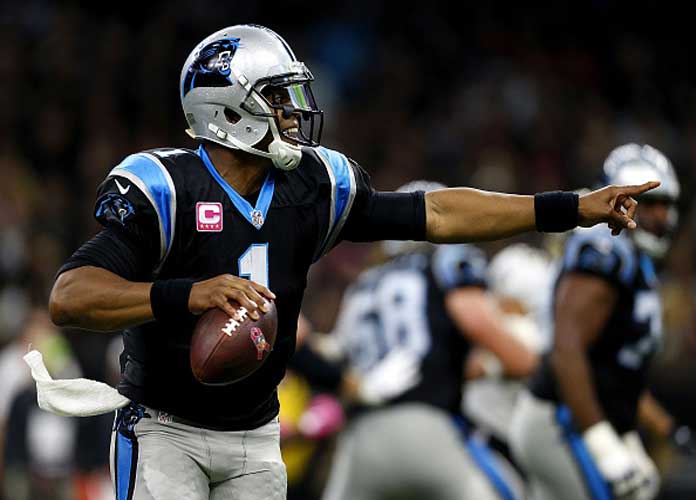 NEW ORLEANS, LA - OCTOBER 16: Cam Newton #1 of the Carolina Panthers scrambles out of the pocked during the first half of a game against the New Orleans Saints at the Mercedes-Benz Superdome on October 16, 2016 in New Orleans, Louisiana. (Photo by Jonathan Bachman/Getty Images)

The Carolina Panthers defeated the Arizona Cardinals 30-20 at home on Sunday to snap a four-game losing streak, but Cam Newton wasn’t completely happy.

After the win, the Panthers quarterback and reigning MVP lambasted the officials for their lack of calls after he was hit.

“It’s really taking the fun out of the game for me,” he said in a post-game press conference. “At times I don’t even feel safe. And enough is enough.”

Newton, 27, said he particularly objected to how referees reviewed hits against him while he was in the pocket.

“I don’t think there’s a person that can go through what I go through and still keep their heads,” he said. “Hits to the head, that’s one thing. But when you’re not protected in the pocket, that’s another thing.

The QB continued: “The story of my life ever since I came in is, ‘Oh, oh, well, we missed that one. I’m sorry. I’ll try to get it.’ That’s bullcrap. As player in this league if we do something stupid we get fined. If you do something derogatory to somebody else, we get fined. I just can’t keep accepting, ‘Oh, we missed that one.’ Or ‘I apologize for doing that.’ Or ‘I didn’t see it.’ That’s horsecrap.”

With about seven minutes remaining in the third quarter, Cardinals defensive end Calais Campbell hit Newton below the knees, and the latter became visibly upset when officials did not call a penalty on the play.

“I’m speechless,” Newton said of the no-call on the hit by Campbell. “I could’ve torn my ACL. That was the breaking point.”

Newton added that he plans on meeting with NFL Commissioner Roger Goodell regarding his complaints with what he views as officiating inconsistencies.

The league and the NFL Players’ Associated led investigations after Newton took multiple hits to the head during the season opener against the Denver Broncos, but he was never removed from the game.

According to the joint statement, neither side discovered any mistakes with the way things were handled by the team, although they did come up with “enhancements” to concussion protocol.

On Sunday, Jonathan Stewart ran for 95 yards and two touchdowns, and Thomas Davis returned a fumble 46 yards for a score to lead the Panthers (2-5) to a win over the Cardinals. Carolina, who has struggled to generate a pass rush all season, sacked Arizona QB Carson Palmer eight times– three of those by Star Lotulelei – and forced two turnovers.

Davis exited the game with a left knee injury after scoring the first touchdown of his 12-year NFL career. Stewart added touchdown runs of 2 and 1 yards to boost the lead to 21-0 against a Cardinals defense that hadn’t allowed a touchdown in its previous two games.

Arizona (3-4-1) fought back within 30-20 and had the ball at the Carolina 36 with 3:18 remaining. However, defensive end Kony Ealy tipped Palmer’s pass and intercepted it to help seal the Carolina victory.

The Panthers will next visit the Los Angeles Rams on Sunday, while the Cardinals will have a bye for Week 9 and then host the San Francisco 49ers on Sunday, Nov. 13.

NEW ORLEANS, LA – OCTOBER 16: Cam Newton #1 of the Carolina Panthers scrambles out of the pocked during the first half of a game against the New Orleans Saints at the Mercedes-Benz Superdome on October 16, 2016 in New Orleans, Louisiana. (Photo by Jonathan Bachman/Getty Images)