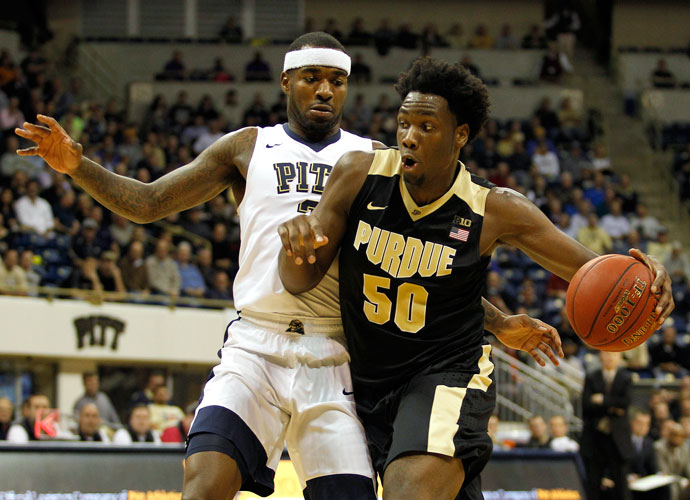 PITTSBURGH, PA - DECEMBER 01: Caleb Swanigan #50 of the Purdue Boilermakers drives to the hole against Michael Young #2 of the Pittsburgh Panthers during the game at Petersen Events Center on December 1, 2015 in Pittsburgh, Pennsylvania. (Photo by Justin K. Aller/Getty Images)

Former college basketball star Caleb Swanigan has died at the age of 25. Swanigan was a standout basketball player at Purdue University after overcoming a rough childhood and playing in the NBA for a few seasons before his death.

Such sad news to wake up to today. Former Purdue star and NBA player Caleb Swanigan has passed away.

Swanigan was 25 years old. I first met him when he was on the AAU circuit and he was always such a nice, sweet kid. Had a tough road. Will be sorely missed. https://t.co/VfA9fPrVN8

The Allen County’s coroners’ office has said that Swanigan died of natural causes. Swanigan grew up homeless, at times living under a bridge in Utah before he was adopted. He and three of his five siblings had faced trouble with the law growing up, and Swanigan was the only one of his siblings to graduate high school. Swanigan went to high school at Homestead High School and had one of the most dominating careers in Indiana high school history. He won the Indiana Mr. Basketball Award after leading Homestead to a state title in 2015.

He was a highly sought-after, a five-star recruit and the number-one ranked player out of Indiana. He initially committed to Michigan State but later switched his commitment to Purdue. Swanigan’s dominance didn’t stop at the high school level. At Purdue, he quickly cemented himself as one of the best big men in the Big Ten. He averaged 18.5 points and 12.5 rebounds his sophomore season with the Boilermakers and was named a Consensus All-American and Big Ten Player of the Year.

Swanigan was drafted with the 26th pick by the Portland Trailblazers in the 2017 NBA Draft. He has a subpar tenure with the Trailblazers before being traded to the Sacramento Kings in 2019. After a season and a half with the Kings, he was traded back to Trailblazers where he opted out of playing in the NBA Bubble in 2020. That was the last time he played NBA basketball. He was arrested in 2021 for possession of marijuana.

Many are devastated by the news of Swanigan’s loss, with Purdue’s associate communications director saying, “You think about what he overcame to get here. That’s the thing that hurts the most.”