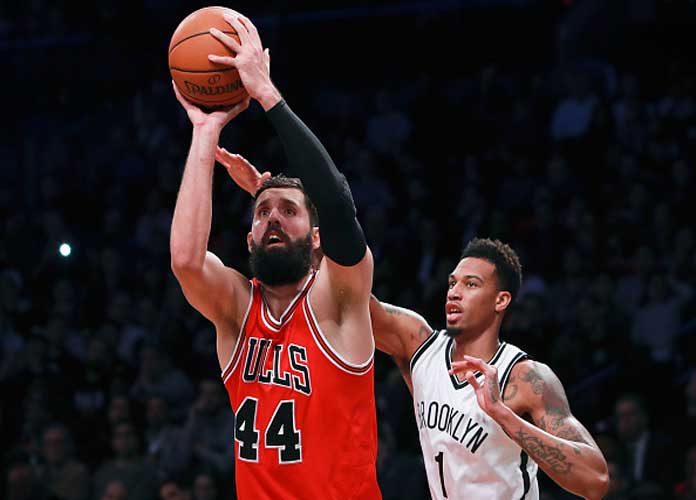 NEW YORK, NY - OCTOBER 31: Nikola Mirotic #44 of the Chicago Bulls shoots a jumper against Chris McCullough #1 of the Brooklyn Nets during the second half at Barclays Center on October 31, 2016 in New York City.

The Chicago Bulls continued their dominant season start with an explosive 118-88 road victory over the Brooklyn Nets on Monday night.

The Bulls are now 3-0 this season, their first such start since the 1996-97 season, and it comes despite concerns that off-season changes like departure of Derrick Rose and arrival of Dwyane Wade might see the team take some time to adjust to their new roster.

Jimmy Butler led Chicago with 22 points, and six other Bulls players scored in double figures, including Wade, who scored 12 in his first road game with his new team.

“Our intensity out of the gate has been really good,” said coach Fred Hoiberg, whose Bulls scored 38 points in the opening quarter and never trailed after the opening three minutes.

Wade’s points included a slick crossover move on the Nets’ Bojan Bogdanovic in the fourth quarter that drew some appreciative gasps from the crowd.

“I always get great support when I come here,” Wade said. “The fans are amazing. It feels like home. I don’t know if they cheer like that for me at home when I got the ball. So it was great to be out there.”

Bogdanovic led Brooklyn with 15 points while Jeremy Lin added 14 and Brook Lopez had 13 in 22 minutes after resting Saturday.

Canaan substituted for the injured Michael Carter-Williams, who went down with a left knee issue and would not return. Canaan made a trio three-pointers and made all four of his shots for 13 second-quarter points in eight minutes as the Bulls gained a 65-44 halftime lead. It was the Bulls’ second straight game in which they led by 21 at halftime. Chicago also continues to lead the NBA in percentage of baskets with assists with 17 for 25 field goals in the first half and a 30-20 rebounding advantage.

Rondo had a mid-court steal against Lin for a score, and Butler was in position for a follow after Rondo fired 50 feet ahead to Wade for a shot that was blocked. Chicago extended their lead to 82-55 with Mirotic confident in his shots and then Gibson ended the quarter with a pair of tough moves inside for a 93-66 Bulls lead after three quarters.

Wade then drew a standing ovation and left with the starters and leading by 25 with seven minutes remaining.

The Bulls will next visit the Boston Celtics on Wednesday night, while the Nets (1-3) will host the Detroit Pistons that same night.

NEW YORK, NY – OCTOBER 31: Nikola Mirotic #44 of the Chicago Bulls shoots a jumper against Chris McCullough #1 of the Brooklyn Nets during the second half at Barclays Center on October 31, 2016 in New York City.