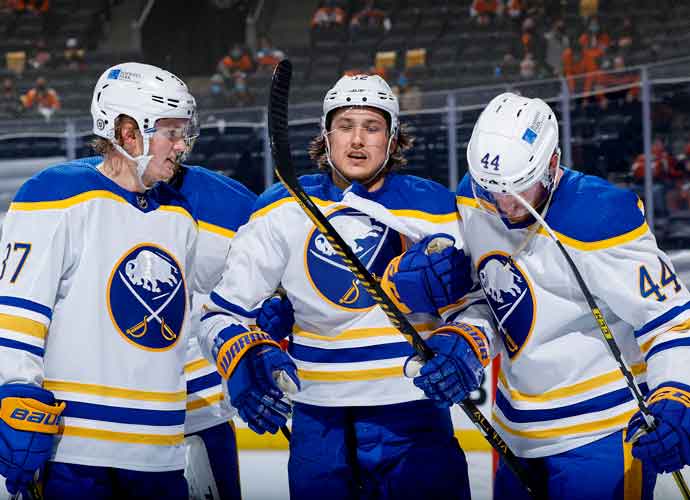 PHILADELPHIA, PENNSYLVANIA - MARCH 09: Brandon Montour #62 of the Buffalo Sabres is helped off the ice following an injury during the first period against the Philadelphia Flyers at Wells Fargo Center on March 09, 2021 in Philadelphia, Pennsylvania. (Photo by Tim Nwachukwu/Getty Images)

The Buffalo Sabres will receive the number one overall pick in the 2021 NHL Draft after winning Wednesday’s lottery. They have received the first pick twice in the past four years. They used the first pick in 2018 to acquire Rasmus Dahlin.

The FIRST overall selection in the 2021 #NHL Draft belongs to the @BuffaloSabres!#LetsGoBuffalo pic.twitter.com/dcxqGRC4C0

The Sabres won only 15 games this season, which was the fewest in the league. They were the lowest-ranked team in the NHL and scored only 37 points. They had a 16.6 percent chance to receive the first pick.

The draft order for the first 10 picks now stands as such:

The Arizona Coyotes were not eligible to win the lottery. This was due to a violation of NHL combine testing policies during the 2019-2020 season, which forced them to give up their first-round pick. The Coyotes were also relieved of their second-round pick in last year’s draft.

“It’s a great moment for our franchise,” said Sabres manager Kevyn Adams during the lottery. “It’s obviously been a tough year for a number of different reasons… It’s a step in the right direction. We need to get better in every area in every way.”

The Sabres do not have a clear pick at number one. Matthew Beniers and Owen Power from the University of Michigan have been floated as possible picks. Power was recently ranked as the best recruit in North America by NHL Central Scouting. Other prospects include William Eklund and Simon Edvinsson from the Swedish Hockey league.

The NHL draft will begin on July 23 with the first round. Round two to seven will finish on July 24.