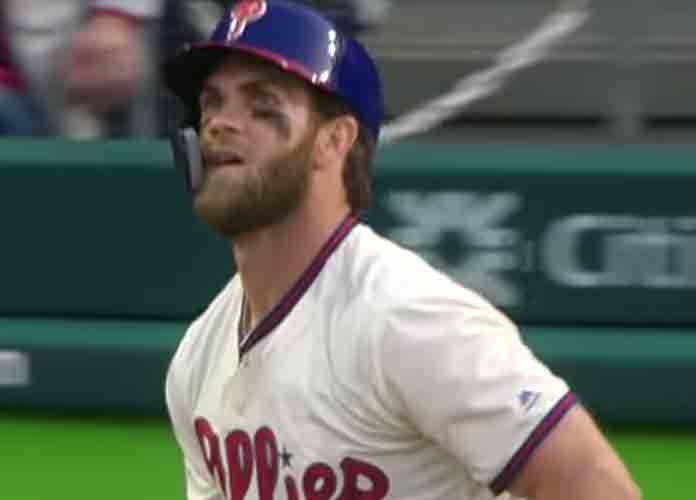 The Philadelphia Phillies beat the Atlanta Braves 5-1 on Sunday night to complete a three-game sweep of their NL East division rivals. It’s their first opening-series sweep since 2011 and it’s big news because it comes against the reigning division champs. The 2011 season was both Philly’s last winning year and most recent playoff appearance.

The Phillies showed off their offseason pickups, Bryce Harper and Andrew McCutchen, in the game. Both homered. In the bottom of the third, McCutchen homered to tie the game up 1-1.

Harper showed up the whole game. On top of his dinger, he doubled and walked. Already up 3-1 in the top of the seventh, he sent a solo shot deep into the air and out of the park. Of course, Citizens Bank Stadium erupted.

End your night with one last look at Bryce’s majestic blast. #SundayNightBaseball pic.twitter.com/ENHpv3esom

Harper’s arrival in Philly seems to be going as well as it can be. The Bryce Bow is the newest tradition as the team rises up from the basement of the NL East and he seems to be meshing well with his teammates. Throughout the game, the 26-year-old can be seen giving out complex handshakes to his squad.

All of Bryce Harper’s different handshakes are aesthetically pleasing. pic.twitter.com/oALTQusPa5

Meanwhile, Jake Arrieta‘s season debut had its ups and downs. After signing a monster three-year, $75 million deal with the Phillies, he didn’t live up to the hype last season. In his first game back, Arrieta walked six batters, hit another and threw only 55 strikes. Not exactly eye-popping numbers. However, he did get the win and threw six innings, giving up only one run.

Philly will have a day off before taking on the Washington Nationals. The Braves will play the Chicago Cubs on Monday night.