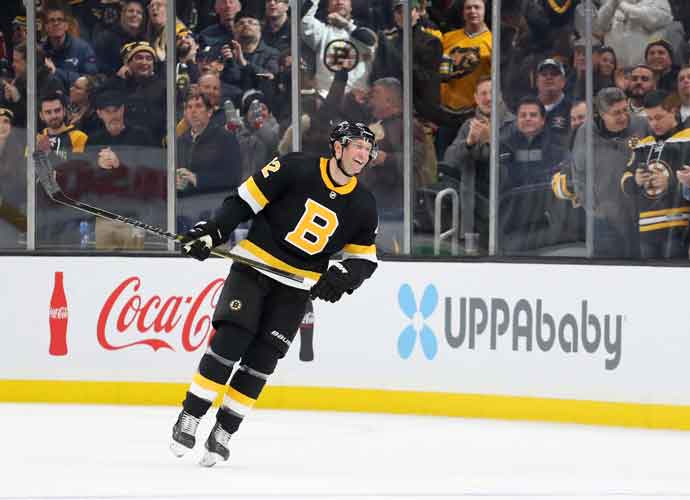 BOSTON, MASSACHUSETTS - DECEMBER 01: David Backes #42 of the Boston Bruins celebrates after scoring a goal against the Montreal Canadiens during the third period at TD Garden on December 01, 2019 in Boston, Massachusetts. The Bruins defeat the Canadiens 3-1.

On Sunday night, the Boston Bruins beat the Montreal Canadiens 3-1 in Boston to extend their current winning streak to seven games. On the other hand, for the Canadiens the loss pushes their losing streak to an unfortunate, season-high of eight games.

David Backes, the Bruins alternate captain, scored his first goal of the season, after not playing for nearly a month. Backes has been out since November 2 when he was involved in a vicious collision with Scott Sabourin of the Ottawa Senators.

“You could see (the emotion) it on my face. That was elation,” Backes said. “I’ve been watching this team do this for a month, and now it’s great to be part of it.”

Many were unsure of what Backes would bring to the table upon his return, and whether he’d be a bit shaky or rusty at first.

“We didn’t know what he’d have, to be honest with you,” Bruins coach Bruce Cassidy said. “He hadn’t played in a while. I thought he gave us some good energy, had a couple looks, was banging bodies.”

Backes’ goal was, in fact, the decider, coming with 9:31 left in the third period off of a feed from David Krejci. Jake DeBrusk also added a goal, his sixth of the year; meanwhile, forward David Pastrnak added a league-leading 25th goal to amount to a 3-1 final in the Bruins’ favor.

Conversely, for the Canadiens, that loss makes it eight in a row.

“For 45, 46, 47 minutes, we were playing solid hockey,” Montreal coach Claude Julien said. “We needed that win desperately, and now we’ve got to go back home and find a way to win the next one.

Montreal goaltender Carey Price attested to the improvement in his team’s play; Price himself had 31 saves on the night.

“If we definitely play like (we did today), the majority of our games are going to be a better result,” Price said.

The Canadiens will look to improve their fortunes when they host the New York Islanders on Wednesday. The Bruins will also play at home on Wednesday, hosting the 16-10-1 Carolina Hurricanes.