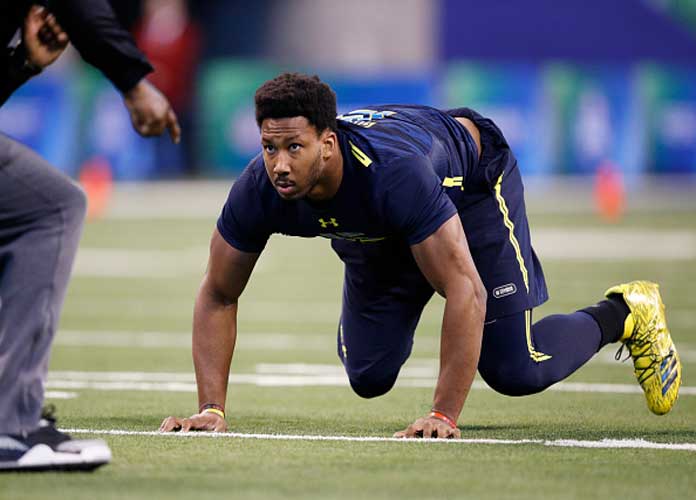 INDIANAPOLIS, IN - MARCH 05: Defensive lineman Myles Garrett of Texas A&M participates in a drill during day five of the NFL Combine at Lucas Oil Stadium on March 5, 2017 in Indianapolis, Indiana. (Photo by Joe Robbins/Getty Images)

The Cleveland Browns announced Friday that they have signed 2017 No. 1 overall draft pick Myles Garrett to a four-year deal worth $30.4 million guaranteed.

According to NFL Network Insider Ian Rapoport, the 21-year-old defensive end’s contract includes a $20.25 million signing bonus and a team option for a fifth season, just like all rookie deals for first-round selections.

Garrett, who was widely predicted to be the top pick in this year’s draft, recorded 31 sacks and 47 tackles for loss and also forced seven fumbles during his college career at Texas A&M.

Green Bay Packers inside linebacker Joe Thomas, who was drafted by the Browns as a first-round pick in 2007, praised Garrett earlier this offseason.

“I’m just impressed with his demeanor and his willingness to learn and his humbleness,” Thomas said of the Arlington, Texas native. “but also you see that fire that’s burning inside him to be great and I think those are the hallmarks of guys that have a chance to be really excellent football players.”

The Browns have now secured six of their ten draft picks from 2017. Garrett’s fellow first-round draft-mates, safety Jabrill Peppers and tight end David Njoku, have not yet officially signed with Cleveland.

.@Seal’s “Kiss From a Rose” was @MylesLGarrett’s song of choice for his signing …

Shortly after he was drafted, Garrett told ESPN’s Randy Moss that he will do everything he can to beat Ben Roethlisberger.

“I’m going to try to take him down,” Garrett said of the Pittsburgh Steelers quarterback. “I can’t wait to face him,” the rookie added after saying he has been following Roethlisberger’s career for “a very long time.”

The division-rival Browns and Steelers will face off in Week 1 next season.

INDIANAPOLIS, IN – MARCH 05: Defensive lineman Myles Garrett of Texas A&M participates in a drill during day five of the NFL Combine at Lucas Oil Stadium on March 5, 2017 in Indianapolis, Indiana. (Photo by Joe Robbins/Getty Images)