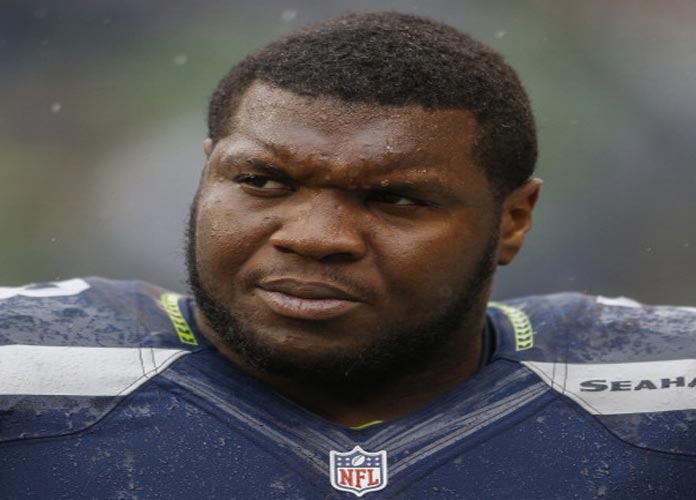 SEATTLE, WA - SEPTEMBER 22: Tackle Alvin Bailey #78 of the Seattle Seahawks looks on during the game against the Jacksonville Jaguars at CenturyLink Field on September 22, 2013 in Seattle, Washington. (Photo by Otto Greule Jr/Getty Images)

Court records revealed Bailey, 25, failed a field sobriety test, registering a reading of 0.145 percent, and was cited for OVI (operating a vehicle while intoxicated).

The right guard is also facing misdemeanor charges on possession of drug paraphernalia, drug abuse and failure to comply with a lawful order.

According to the Royalton Post, citing a police report, an officer spotted Bailey speeding northbound on West 130th Street. After chasing him, an officer saw Bailey exiting the vehicle, and he reportedly ignored commands to return inside. Instead, Bailey reportedly bent down under the tailgate. The player then stood up, appearing surprised at the officer’s presence. The arrest occurred around 1 a.m. Bailey later told police he had been drinking on the team plane as the Browns flew back from Sunday’s game in Miami., per the police report.

In 2007, the NFL banned alcohol from all team activities, including flights to and from games. Bailey admitted to police that he drank several whiskeys on the team plane home, which landed at 8:45 pm.

“We are aware of the incident and have spoken to Alvin to express our displeasure and extreme disappointment,” Sashi Brown, the team’s head of football operations, said Monday night in a statement obtained by Ohio.com. “This is a matter that must be taken very seriously and we will comment further at the appropriate time.”

The NFL has been made aware of the incident, and Bailey will be subject to the league’s personal conduct policy.

Bailey was at the team facility on Monday. He started at right guard Sunday against the Dolphins in place of John Greco, who moved to center in place of the injured Cameron Erving. Bailey signed with the Browns in March after spending two seasons with the Seattle Seahawks.

Bailey is due in North Royalton’s Mayor’s Court on Thursday at 9 a.m.

SEATTLE, WA – SEPTEMBER 22: Tackle Alvin Bailey #78 of the Seattle Seahawks looks on during the game against the Jacksonville Jaguars at CenturyLink Field on September 22, 2013 in Seattle, Washington. (Photo by Otto Greule Jr/Getty Images)