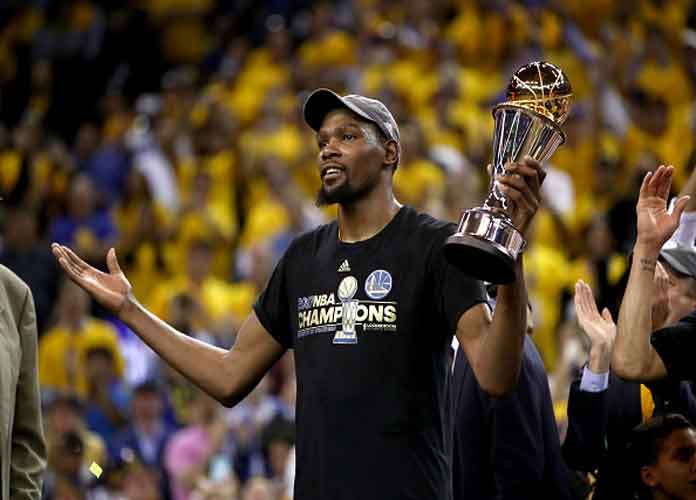 Brooklyn Nets fans can now feel at ease – Kevin Durant feels fine about the ongoing conflict between the Nets and Kyrie Irving.

"What is being mad going to do? We're not going to change his mind…life is amazing so I can't be too mad at somebody making a decision for themselves"

Kevin Durant explains why the Nets aren't upset about Kyrie Irving being absent from the Nets pic.twitter.com/QFBwDMWXly

Durant said that he has not spoken to Irving since the Nets announced on Tuesday that their starting point guard will not practice or play with the team until he complies with New York City’s COVID-19 vaccination mandate for all players.

"I definitely want Kyrie to be around…Kyrie made his decision on what he wanted to do…and the team did the same. It's on me to just focus on me and do my job" – Kevin Durant

Durant says he's "positive" things will work out between Irving & the Nets pic.twitter.com/lV0t1DFRjI

“It’s on me to just focus on me, and do my job, and let those two parties handle that situation. I want our whole team together, and I want us to be at full strength, but sometimes it don’t work out that way. But I am still positive that things will work out the best for both parties.”

Irving said he is not pro-vaccine or anti-vaccine and that he respects both sides. He also reiterated that he is not at odds with the Nets organization or making a political statement.

This assertion comes as a surprise as Irving has stated before that his decision to opt-out from receiving the COVID-19 vaccine was his own choice.

Durant later told reporters that “I can’t be too mad at somebody making a decision for themselves.”

“Who am I to get upset at that? Just focus on what we got in this locker room,” Durant said. “When Irving is ready, I am sure he will talk to Joe and Sean and they’ll figure it out and they’ll tell us. Until then we are going to keep grinding.”