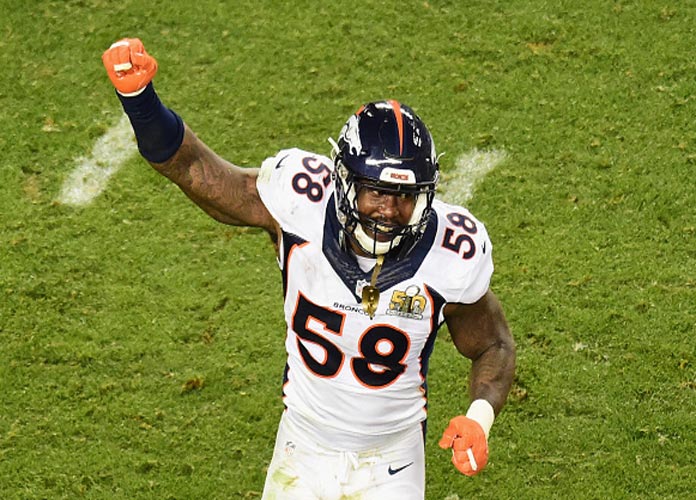 Von Miller is one of the dozens of NFL players who protested the national anthem on Sunday, and now the Denver Broncos linebacker has lost an ad endorsement.

Miller — the Super Bowl 50 MVP — knelt during the anthem before the Broncos’ 26-16 loss to the Buffalo Bills and a Colorado car dealership has subsequently stopped airing its commercials featuring Miller.

The Colorado Springs Gazette reported that an employee of the dealership confirmed they had dropped 28-year-old Miller, a five-time Pro-Bowler who signed a six-year, $114.5 million deal (with $70 million guaranteed) in July 2016 to become the highest-paid defensive player in NFL history.

The dealership said in a statement that while Miller had not been fired “this weekend’s events remind us that sometimes we feel that we best represent ourselves.”

“We felt like President Trump’s speech was an assault on our most cherished right, freedom of speech,” Miller told reporters of him and his teammates’ decision to protest the anthem. “At this time we felt like, as a team, we had to do something. We couldn’t just let things go.”

The wave of protests — which included sitting, kneeling or linking arms — came after Donald Trump wrote several tweets criticizing the NFL and made a series of remarks at a rally in Alabama on Friday.

“Wouldn’t you love to see one of these NFL owners, when somebody disrespects our flag, to say, ‘Get that son of a b—- off the field right now,'” Trump said at a rally for Republican Alabama Senate candidate Luther Strange on Friday. “‘He is fired.'”

Several NFL and NBA coaches, players and executives excoriated Trump for his comments, while the President’s administration attempted to defend Trump’s statements.

Treasury Secretary Steven Mnuchin said players should protest the flag and anthem off the field at another time.