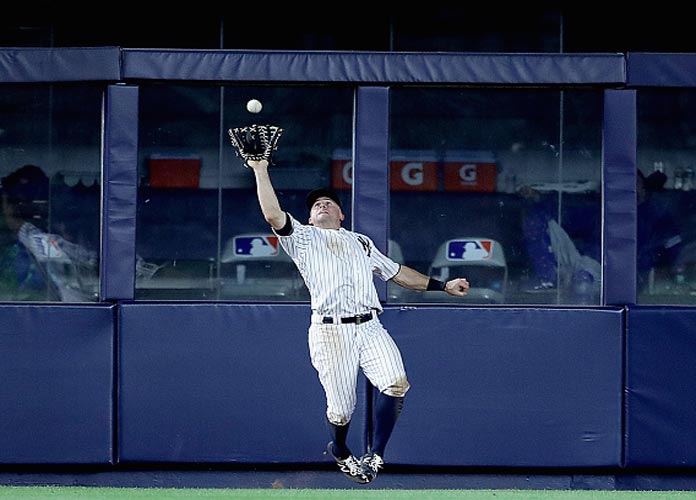 Brett Gardner slammed into the left-field wall as he leaped to catch Justin Smoak‘s bases-loaded, two-out, ninth-inning drive to seal a thrilling, 7-6 home victory for the New York Yankees over the Toronto Blue Jays Tuesday night.

Gardner’s fantastic catch gave the Yankees some relief after the Jays scored twice on Dellin Betances, who tossed a season-high 40 pitches in playing his third consecutive game. Blake Parker recorded the final two outs to earn his first save with the Yankees and the second of his career.

If you look closely at Gardner’s catch, you’ll notice the ball rolled around in his glove and nearly slipped out,  which makes the snag all the more exciting.

Take another look at the catch of the night from Brett Gardner. #YANKSonYES pic.twitter.com/pbIw5L9qf0

“That game was back and forth at the end, and some guys came through with big at-bats,” Gardner, a left fielder, said. “Guys came through in some big spots. I was excited, man. Every game at this point is big, especially the ones you have a chance to win that you’re supposed to win. It was a big win tonight.”

“We’re trying to get in the playoffs,” Headley said. “However that happens, obviously we haven’t given up on the division, but we’ve just got to continue to win games and give ourselves a chance to do either. First things first is to hopefully track down the Wild Card stuff, but if we can keep going and take the East, that would be a bonus.”

Though Smoak praised Gardner for catching his hit, the Toronto first baseman seemed somewhat satisfied with his blast.

“I feel like I hit it decent — I barreled it — thought it had a chance, and Gardner made a great play on it to come up with it right there,” Smoak said.

Gardner’s catch clearly got many, if not all, of his teammates excited.

“As soon as he jumped up, I saw it went in his glove,” Gregorius said. “Everybody started jumping. It was an exciting feeling. I felt like we won the World Series right there.”

The Yankees turned a key 3-6-1 double play to escape a bases-loaded jam in the sixth inning, as Adam Warren got Smoak to smack a ground ball to Austin. The toss was sent to Gregorius, who stayed in on a slide from Pillar and threw the ball back to Warren covering first base. New York used three pitchers in the inning, with Warren following Cessa and James Pazos. Warren worked 2 1/3 strong innings of one-hit ball before Yankees manager Joe Girardi played matchups in the eighth, thus causing Toronto to briefly retake the lead.

The two teams will face off again for the finale of their three-game series at Yankee Stadium on Wednesday night. Right-hander Marcus Stroman (9-6, 4.58 ERA) will start for the Blue Jays (77-61, 1st in AL East), while righty Bryan Mitchell will take the mound for the Yankees (72-65, 4th in AL East).