Brett Baty Homers On Debut But His Family's Ecstatic Reaction Gets All The Attention - uSports.org 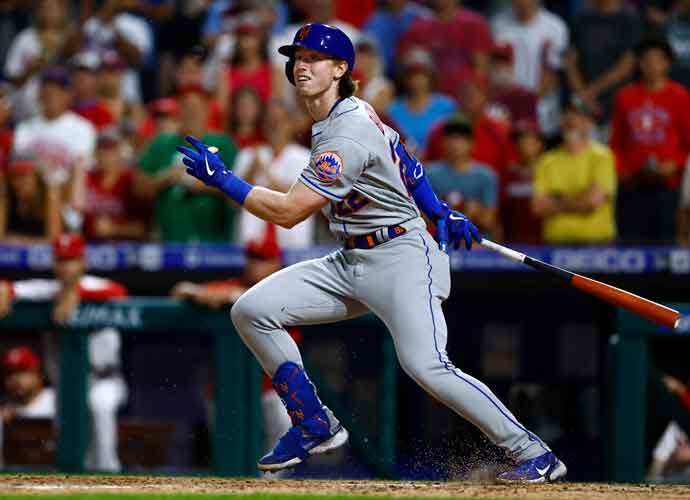 PHILADELPHIA, PA - AUGUST 20: Brett Baty #22 of the New York Mets in action against the Philadelphia Phillies during game two of a double header at Citizens Bank Park on August 20, 2022 in Philadelphia, Pennsylvania. (Photo by Rich Schultz/Getty Images)

In the New York Mets’ first two games against the Atlanta Braves this week, the team only managed to score a single run across 18 innings. But in the first at-bat of his MLB career on Wednesday, third baseman Brett Baty drove in two on a long fly ball to right-center. The homer proved to make the difference as the Mets went on to win 9-7.

Baty’s second-inning bomb off Braves starting pitcher Jake Odorizzi was not well-received by most fans at Truist Park in Atlanta. One section was rocking, however, as Baty’s family was in attendance for his debut.

The reaction of Brett Baty's family to his first homer is everything pic.twitter.com/Zl0ydKWHIe

Speaking with SNY’s Steve Gelbs later on, Baty’s father, Clint, said that the family was overjoyed at his son’s immediate success.

“It was goosebumps and tears and hugs. You couldn’t ask for a better at-bat,” Clint said.

"It was goosebumps and tears and hugs. You couldn't ask for a better at-bat"

Though Baty’s parents were the loudest fans in attendance for their son’s home run, they weren’t the only ones watching.

At Lake Travis High School, Baty’s alma mater, in Austin, Texas, young baseball players were also watching the game on a projector in their clubhouse. As a member of the Cavaliers, Baty hit .615 with 19 home runs and was named the Gatorade Texas Player of the Year in 2018.

After getting drafted in the first round of the 2019 MLB Draft, Baty was always a highly touted prospect in the Mets’ farm system. It was unlikely that he would reach the majors in the 2022 season, however, as New York only promoted him to the Triple-A Syracuse Mets in early August, where he played in six games and batted .364.

But with utility player Luis Guillorme out for at least four weeks and third baseman Eduardo Escobar playing through an oblique injury, the Mets were suddenly shorthanded and needed to call up Baty prematurely. Without any expectations, the rookie said he was trying his best to enjoy the moment.

“[The big leagues] wasn’t on my mind at all,” Baty said. “I was just worried about winning games for Syracuse, but now I am here to win ball games for the New York Mets.”

In a back-and-forth contest that the Mets went on to win, Baty’s home run represented an immediate impact on a game between two MLB playoff contenders. But for a player that enthusiastically embraced his family after the game, Wednesday night clearly meant more than division rivalries or even rising stardom. In many ways, it was the realization of a lifelong dream.