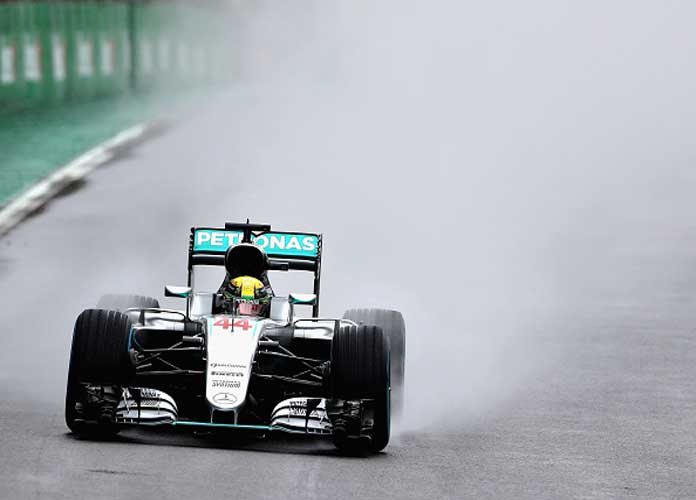 Lewis Hamilton has downplayed his chances of winning this year’s Drivers’ F1 World Championship despite his tremendous victory in the Brazilian Grand Prix in Sao Paulo on Sunday.

Even if Hamilton finishes the season with a fourth straight win, his Mercedes teammate Nico Rosberg will be crowned champion if he finishes on the podium at the season-ending Abu Dhabi GP on Nov. 27.

“I’m in an awkward position going into the last race,” said Hamilton. “It doesn’t really make a big difference if I go and drive like I do right now because I’ve already lost so much [ground] through the year.

“But I can’t give up because I don’t know what could happen. It’s unlikely, but you never know.”

Hamilton was spectacular at the front despite the treacherous conditions, lapping consistently faster than anyone.

Following each restart, Hamilton cruised easily away from Rosberg– at one point even building an 18-second lead in 14 laps before another safety car cut his lead to nothing.

The 31-year-old Brit’s victory is the 52nd of his career, making him the second most successful race winner of all time ahead of Alain Prost (51). Michael Schumacher is well ahead with 91.

“Not too bad, huh,” said Hamilton. “I was generally just chilling up front. When it rains it’s usually a good day for me. It was tricky for everyone. There were definitely opportunities for aquaplaning, which everyone did.

Rosberg said: “Lewis just did a great job. It was very difficult conditions and I can live with second for sure.”

Hamilton’s closest rival for most of the race was Red Bull’s Dutch driver Max Verstappen, who passed Rosberg around the outside of Turn Three on lap 32 on one of several restarts after a safety car period.