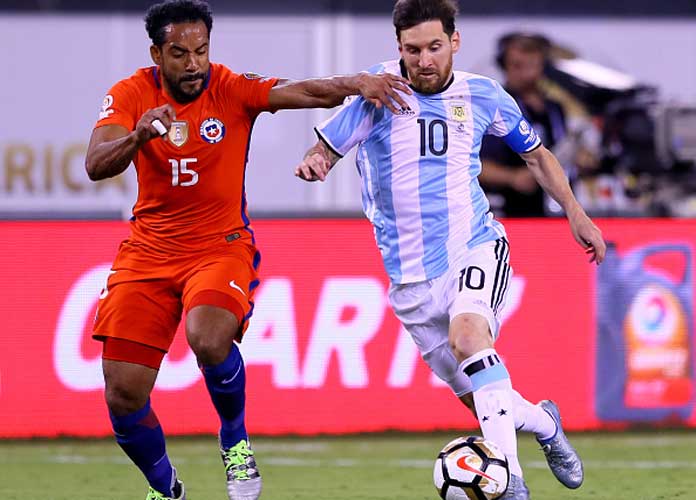 Brazil defeated Uruguay 4-1 thanks to a hat-trick from former Tottenham Hotspur midfielder Paulinho in a 2018 Russia World Cup qualifying game in Montevideo on Thursday.

Neymar also scored for Brazil, which recovered from allowing an early penalty from Uruguay’s Edinson Cavani.

With the victory, Brazil extended their lead in the South American qualifying group to seven points. It also marked coach Tite’s seventh consecutive qualifying win since taking over from Dunga in September. The five-time FIFA World Cup champions could qualify for Russia on Tuesday by beating Paraguay, should Ecuador and Chile both fail to win.

Cavani’s goal came just seven minutes after kick-off when a mistake from Brazil defender Marcelo led goalkeeper Alisson to foul the Uruguayan forward. Cavani, a Paris Saint-Germain star, scored the penalty to record his ninth goal in South American qualifiers, more than any other player. Uruguay entered Thursday’s game having won all six of their previous home qualifiers.

Ten minutes afterwards, Paulinho — who is now playing for Chinese club Guangzhou Evergrande — tied it with a shot from the edge of the penalty area, sinking the ball into goalie Martin Silva’s left corner. The game remained tied 1-1 at halftime, but Paulinho then scored seven minutes after the break.

Uruguay began launching stronger attacks to attempt to equalize, but Brazil’s defense proved too robust for the hosts. After 74 minutes of play, defender Miranda cleared from his box, Neymar beat Uruguay’s Sebastián Coates to the ball and lobbed a shot over Silva to make it 3-1.

Paulinho earned his hat-trick in stoppage time in quite an unconventional way: by pushing the ball into the goal with his chest following a Dani Alves cross.

“Not in my wildest dreams I expected something like this,” Paulinho said afterwards.

“I was happy about the 90 minutes,” the coach said. “Our capacity to absorb a goal against us and keep playing was based on one idea. Our team is very self-aware. We did more than controlling the match, we were dominant.”

Uruguay was missing Barcelona forward Luis Suarez, who is suspended, while Brazil played without Manchester City’s teenage forward Gabriel Jesus, who sat out with a broken toe. Brazil’s Alves will be out for Tuesday’s game against Paraguay in São Paulo, while Uruguay will travel to play Peru.

Meanwhile, Argentina beat Chile 1-0 in Buenos Aires on Thursday thanks to a 16th-minute penalty from Lionel Messi.

With the victory, the Albiceleste is now in third place in the South American qualifying table, while Chile fell to sixth. Chile defeated Argentina in the US-hosted 2016 Copa America Centenario last summer, after which Messi initially announced he would retire from international soccer.

Just a few months ago, following their previous World Cup Qualifying game, Messi announced he and his Argentina teammates were launching a boycott against the press for the way the media has recently criticized them.

However, Argentina coach Edgardo Bauza is relieved his team managed to win the game, which he viewed as a challenging matchup.

“This was very difficult. It was like a knockout stage match.”

His Chilean counterpart, Juan Antonio Pizzi, disagreed. “I consider it totally unfair that we lost,” he said. “We managed to control the virtues of the Argentinians, and they are many. We deserved to get one goal.”

Fourth-place Colombia also won their latest match 1-0 against Bolivia thanks to a penalty, with Real Madrid’s James Rodriguez converting the kick.

Lille defender Júnior Alonso scored the winner for Paraguay as they beat fifth-placed Ecuador 2-1, while Venezuela drew 2-2 at home to Peru. Venezuela led 2-0 at half-time, but goals from André Carrillo and Paolo Guerrero earned Peru a point.

In the next round of qualifiers, Argentina will visit Bolivia, where they have not won since 2005. Chile will host Venezuela, while Colombia visit Ecuador for a key qualifier.