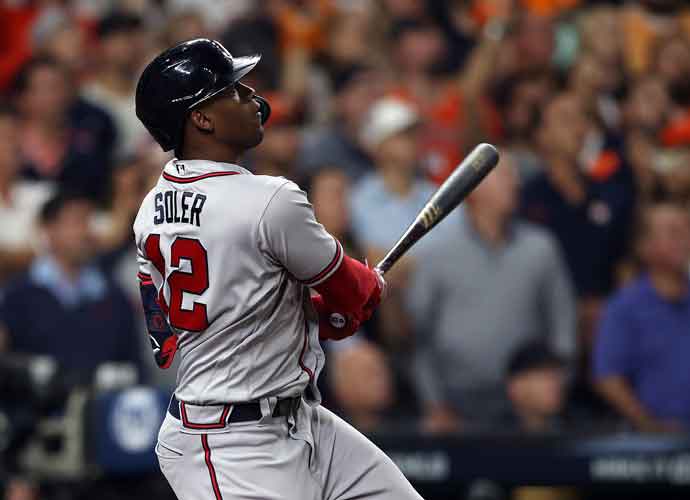 HOUSTON, TEXAS - NOVEMBER 02: Jorge Soler #12 of the Atlanta Braves hits a three run home run against the Houston Astros during the third inning in Game Six of the World Series at Minute Maid Park on November 02, 2021 in Houston, Texas. (Photo by Elsa/Getty Images)

A victory for Braves fans all over the country, the team has won its first World Series since 1995.

The Atlanta Braves defeated the Houston Astros 7-0 in Game 6 to take the series 4-2. Atlanta jumped out to a sizable lead thanks to two multi-run home runs early in the game. Jorge Soler delivered a massive three-run blast in the third inning to put Atlanta up early. Statcast had Soler’s home run traveling 446 feet with an exit velocity of 109.6 mph.

SOLER HAS LEFT THE BUILDING. pic.twitter.com/IOc5wXreRb

In the fifth, the Braves plated a pair of runs on a Dansby Swanson homer. Swanson’s wasn’t quite as impressive as Soler’s, but it did have an exit velocity of 108.8 mph and it carried some 411 feet. A Freddie Freeman doubles later in the fifth, and then a homer in the seventh gave the Braves what proved to be an insurmountable 7-0 lead.

“I’m at a loss for words. This is it. This is everything you work for,” Freeman said. “We’ve had so many ups and downs this year. For us to be world champions … That is awesome to hear.”

Soler tapped his heart twice before beginning his home run trot after connecting off rookie Luis Garcia in the third inning, sending the ball flying completely out of Minute Maid Park. Swanson homered again and by the final out, nothing could stop them.

“There’s no place that deserves it more than the city of Atlanta,” Swanson said.

The Astros will now head into a pivotal offseason as Astros Manager Dusty Baker‘s contract is set to expire – it’s unclear if the Astros will retain his services heading forward. Also, shortstop Carlos Correa and starters Justin Verlander and Zack Greinke, are potentially retirement candidates. At a minimum, the Astros could look a lot different come the next opening day.

“We’ve been waiting for a championship in this city for a long time,” Freeman said. “And we delivered it.”