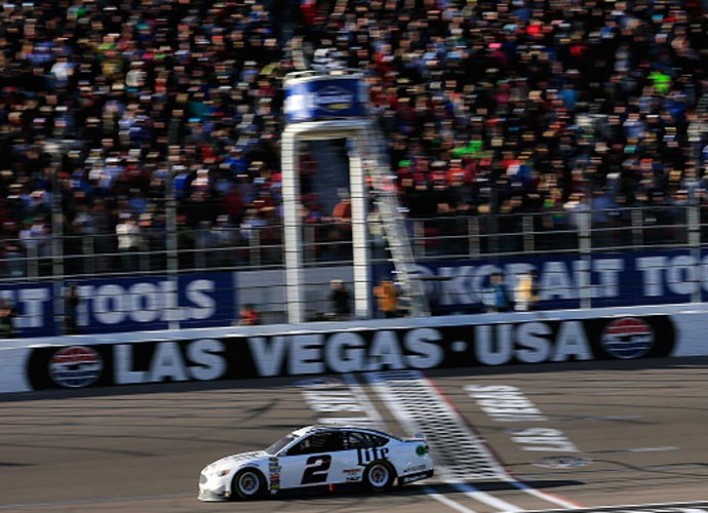 Brad Keselowski passed Kyle Busch with five laps to go Sunday and surged to his second win in three years in the NASCAR Sprint Cup Race Kobalt 400 at the Las Vegas Motor Speedway on Sunday despite strange and windy weather conditions.

Keselowski passed teammate Joey Logano and then caught up with Busch, whose right front wheel vibrated and struggled down the stretch. Keselowski overcame an early speeding penalty and drove his Team Penske Ford to his first Sprint Cup Series victory of the season, as well as his first win in nearly a full year since Fontana in March 2015.

“This is really, really great,” Keselowski stated. “It seemed like there were plenty of challenges, whether it was pit road or the weather or cautions. They threw everything they had at us today . . . but we were able to fight them off and get to Victory Lane.”

Keselowski appeared to bank on having enough fuel to win Sunday’s race. Strong winds and light rain also proved to be a large obstacle on the desert track. Kurt Busch and Kyle Larson fell behind in the opening laps after debris fell into their cars’ grills.

Keselowski surged in front for good after Busch reported problems with his wheel.

Matt Kenseth also spun into Chase Elliott in a late wreck that sidelined both cars, after which Kyle Busch confidently stayed in front off the restart with 35 laps left.

All three manufacturers now have a Cup victory through the first three races. Toyota and Joe Gibbs Racing won at Daytona, Johnson led Chevrolet and Hendrick Motorsports to victory at Atlantam and now Keselowski won for Ford and Team Penske in Las Vegas.