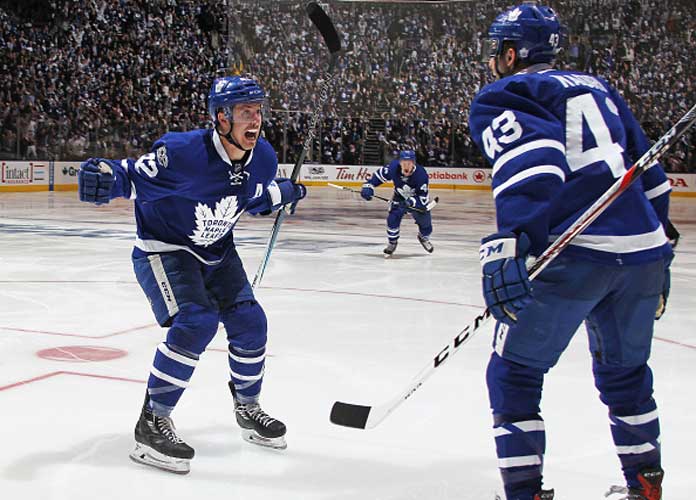 TORONTO, ON - APRIL 17: Tyler Bozak #42 of the Toronto Maple Leafs celebrates his game winning goal in the 1st overtime against the Washington Capitals in Game Three of the Eastern Conference Quarterfinals during the 2017 NHL Stanley Cup Playoffs at the Air Canada Centre on April 17, 2017 in Toronto, Ontario, Canada. The Maple Leafs defeated the Capitals 4-3 in overtime and take a 2-1 series lead.(Photo by Claus Andersen/Getty Images)

The Toronto Maple Leafs got off to a quick start courtesy of Mitch Marner. Down 1-0 to the Boston Bruins, Marner laid out for a shot, hitting the ice, and tying the game up late in the first period.

His second goal would come on a short-hand penalty shot. It was Toronto’s first postseason penalty shot in 20 years. That alone would be enough to seal the win for Toronto. Boston struggled mightily to come up with an offense of their own after their first goal.

So silky. So smooth. #LeafsForever pic.twitter.com/07hYNbigPM

Frederik Andersen made 37 saves and William Nylander and John Tavares also scored for Toronto. They played the first of their four potential home games after locking up the higher seed for the series.

Boston’s mistakes came back to bite them throughout it. Though Tuukka Rask stopped 29 shots for Boston, he found himself with little help aside from a Patrice Bergeron power-play goal midway through the first.

But that meant little as Marner came and tied it up shortly after. Then Boston collapsed. Marner found the puck and a clear path to the goal but Jake DeBrusk was called for bringing him down from behind and sending him crashing into Rask. Marner got his penalty shot and he scored.

With 95 seconds in the period, the Maples Leafs again found the back of the net, this time courtesy of Nylander. Rask saved a pair of shots in the final minute but the horned sounded and the scoreboard read a disappointing 3-1.

Boston got desperate at the end of the game and pulled their goalie with 2:35 left but all that resulted was a Tavares goal sent at the empty net from center-ice.

Icing on the cake after a great effort by @91Tavares. #LeafsForever pic.twitter.com/4gTdUjydHE

Boston will host game two of the series on Saturday night. Games three and four will take place on Monday and Wednesday in Toronto.