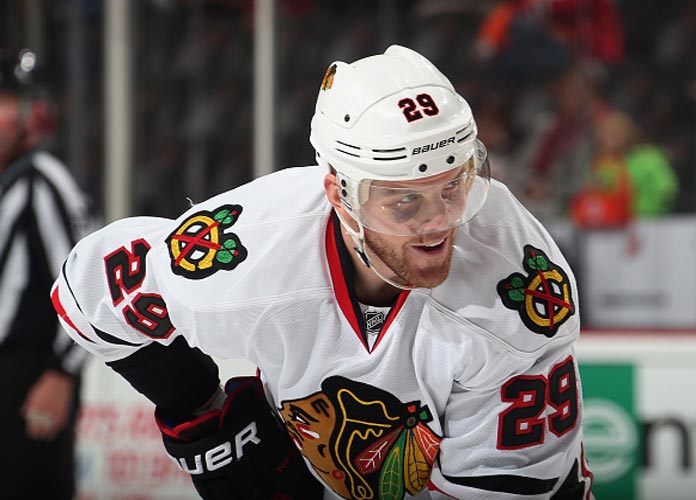 NEWARK, NJ - DECEMBER 09: Bryan Bickell #29 of the Chicago Blackhawks skates against the New Jersey Devils at the Prudential Center on December 9, 2014 in Newark, New Jersey. The Blackhawks defeated the Devils 3-2 in the shootout. (Photo by Bruce Bennett/Getty Images)

The Chicago Blackhawks have attempted to trade left winger Bryan Bickell for more than a year now and since then, many have wondered what exactly it would cost the team to move him and dump his $4 million annual salary-cap.

They now have their answer.

The Blackhawks traded Canadian Bickell and Finnish centerman Teuvo Teravainen to the Carolina Hurricanes on Wednesday for a second-round pick in this year’s draft and a third-rounder in 2017.

General manager Stan Bowman created more cap space for next season with the move but gave up Teravainen, a versatile 21-year-old who still has great potential despite varying performances since making his NHL debut with the Blackhawks on March 25, 2014.

“We’ve had to make difficult decisions in the past … it doesn’t always fit your puzzle,” Bowman said. “… Sometimes it takes moving players that people might be surprised at.”

Chicago now has approximately $61 million in cap space tied up in 15 players for next season. The salary cap was $71.4 million last season. It remains unclear whether the cap will rise, drop or stay unchanged if the players’ union exercises an escalator clause.

The Blackhawks are seeking to re-sign restricted free agent Andrew Shaw, and also want to extend left winger Artemi Panarin, who has one year left on his rookie deal. Panarin earned $2.575 million in bonuses last season, most of which will count against this season’s cap. Giving away Bickell will give the team more room to maneuver around the cap.

“I realize everyone wants an answer (on Shaw), but it’s just too hard to make guesses at this point,” Bowman said. “… Once we figure out what the salary cap number is … we can put together a plan.”

Bickell expressed both relief and excitement regarding the move.

“Obviously the last year, asking for a trade and nothing came through … it’s nice to get this … for a new start,” he said in a phone interview.

The Hawks could have opted to buy out Bickell’s contract and save $3 million against the cap this season, according to generalfanger.com, but the buyout also would have added a cap hit of $1.5 million to the Hawks’ books in 2017-18.

Bickell signed his four-year, $16 million extension after helping the team win a Stanley Cup in 2013 when he scored nine goals in the postseason, including the tying goal late in the third period of the clinching Game 6 of the Stanley Cup Final against the Boston Bruins. This performance earned him the aforementioned extension that ended up costing the Hawks in their trade on Wednesday.

Bickell also scored 11 goals during the 2013-14 season, and seven goals in 19 playoff games after that, but after scoring 14 goals in the 2014-2015 season, he did not maintain this strong performance in the subsequent playoffs. To make matters worse, the left winger developed an eye condition during the Western Conference Finals, a condition Bickell initially believed to be vertigo and that plagued him into the beginning of last season– a season which he spent going back and forth between the Hawks and the Rockford IceHogs of the AHL. He went 25 straight games without scoring a goal for Chicago.

Bickell added he had no feelings of ill will toward the Hawks.

“It is part of the business,” he said. “You see a lot of good friends and a lot of good players go through it with the Hawks — (Brandon) Saad, (Patrick) Sharp, Johnny Oduya. Then you look in 2010 — (Dustin) Byfuglien, (Andrew) Ladd. You can go down the line.”

To add more to their forward depth, the Hawks signed Slovakian winger Richard Panik on Wednesday. Panik, who came to the Hawks in a trade with the Maple Leafs for Jeremy Morin on Jan. 3, scored six goals in 30 games. He cost Chicago $850,000, according to Sportsnet.

Teravainen, a first-round pick in 2012, scored 13 goals and had 22 assists in his first full NHL season. He was also under contract for one more season at a cap hit (approximately $900,000) that would have helped the Hawks.

PHOTO: NEWARK, NJ – DECEMBER 09: Bryan Bickell #29 of the Chicago Blackhawks skates against the New Jersey Devils at the Prudential Center on December 9, 2014 in Newark, New Jersey. The Blackhawks defeated the Devils 3-2 in the shootout. (Photo by Bruce Bennett/Getty Images)