Blackhawks' Jake McCabe To Miss Up To 12 Weeks After Getting Back Surgery - uSports.org 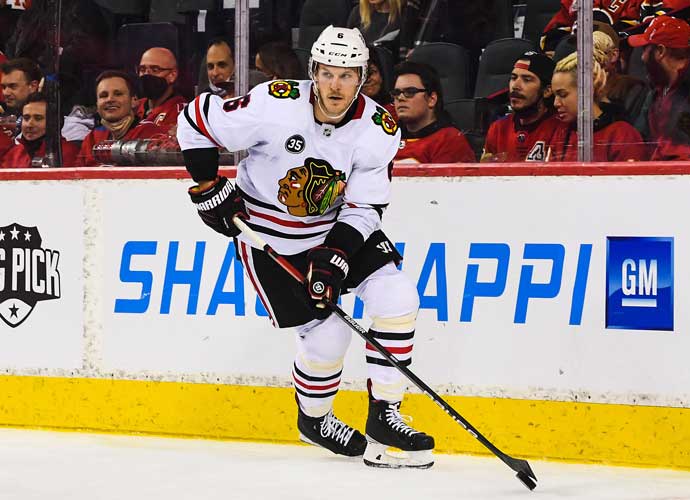 CALGARY, AB - NOVEMBER 23: Jake McCabe #6 of the Chicago Blackhawks in action against the Calgary Flames during an NHL game at Scotiabank Saddledome on November 23, 2021 in Calgary, Alberta, Canada. (Photo by Derek Leung/Getty Images)

Defenseman Jake McCabe is set to miss up to three months after suffering a back injury that has required surgery.

The Chicago Blackhawks said he will miss 10-12 weeks after getting his cervical spine successfully repaired.

Jalen Luypen had his left rotator cuff repaired, he is expected to return in 14-18 weeks.

The unfortunate news comes as McCabe is entering the second year of his four-year $16 million contract, which he signed with the team last July.

When he was a member of the Buffalo Sabres, McCabe suffered both a torn ACL and MCL in February 2021.

It’s unclear how exactly McCabe injured his back.

Meanwhile, Blackhawks insider Charlie Roumeliotis reported that the team knew about the injury for quite some time.

That could have been the reason why the team signed veteran defenseman Jack Johnson, who is coming off a Stanley Cup win this summer.

While Johnson will likely get some playing in McCabe’s absence, don’t expect him to have a big positive impact on the ice.

The 35-year-old ranked near the bottom on the list in advanced metrics with the Colorado Avalanche.

In 74 games, Johnson posted an expected goal for percentage (xGF%) of 46.63, along with a corsi for percentage(CF%) of 47.72, according to Natural Stat Trick.

Additionally, the Blackhawks have been in a rebuild mode.

The organization in the offseason made major moves in the offseason including trading star winger Alex DeBrincat to Ottawa Senators and letting center Dylan Strome walk in unrestricted free agency.

Moreover, bigger names in Patrick Kane and Jonathan Toews have been circulating in the rumor mill all offseason.

But neither have requested trades amid intense times, according to Blackhawks beat reporter Ben Pope.

Neither Patrick Kane nor Jonathan Toews have approached the Blackhawks with trade requests, Kyle Davidson told me today. Despite the rampant rumors (he has seen them), there's "nothing new."

All parties are “excited to get to training camp and see how the season plays out.”

Last season, the Blackhawks finished 27th overall in the league.

This year it’s possible things head so far south that it could be in the running for the first overall pick to draft Connor Bedard, who plays for the Regina Pats out of the WHL.

In 75 games last season, McCabe tallied 22 points with the Blackhawks.

Read more about:
Chicago Blackhawks Jake McCabe
Listen to the uInterview Podcast!
Get the most-revealing celebrity conversations with the uInterview podcast!

Blackhawks Jonathan Jonathan Toews and Patrick Kane Downplay Rumors – But Is A Trade The Inevitable Anyway?