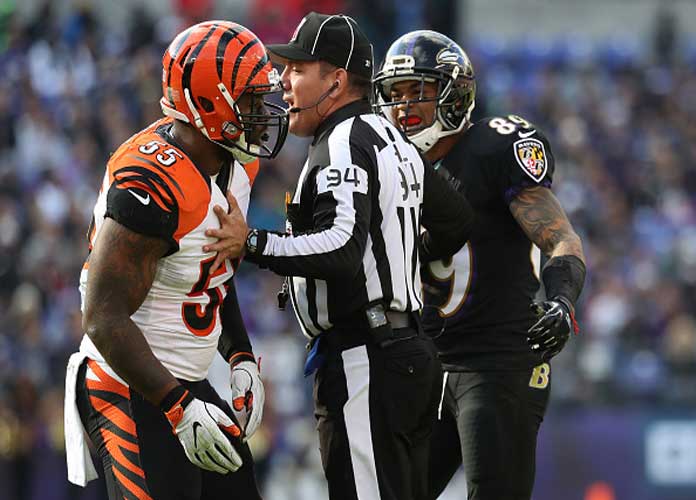 BALTIMORE, MD - NOVEMBER 27: Wide receiver Steve Smith #89 of the Baltimore Ravens and outside linebacker Vontaze Burfict #55 of the Cincinnati Bengals are seperated by referee Clete Blakeman #34 in the first quarter at M&T Bank Stadium on November 27, 2016 in Baltimore, Maryland. (Photo by Rob Carr/Getty Images)

Smith was flagged 15 yards for unnecessary roughness on the third-down play, although Justin Tucker still came on to score a 52-yard field goal and give the Ravens a 10-0 lead in the first quarter.

With a 19-12 lead and only 11 seconds remaining on fourth down, John Harbaugh, a former special teams coach, developed an interesting strategy to help his Ravens secure the win.

The head coach had his players block, hold and even tackle the Bengals so they couldn’t get near punter Sam Koch, who retreated to the back of the end zone.

Koch held the ball until the clock ran out. Harbaugh was able to pull this off because a game can end on an offensive penalty.

The Bengals (3-7-1) have now lost three straight games and tied one before that. They are now here with one victory since Sept. 29, which came against the winless Browns (0-12), and are already tied for the most losses in a season in the Andy Dalton Era.

Dalton converted a fourth-and-2 to Tyler Eifert into the red zone, but saw four passes batted down on the drive, which ended when Elvis Dumervil beat Eric Winston off right tackle to force a fumble recovered by Lawrence Guy.

The fumble marked the second turnover in the red zone of the day. Earlier in the game, Dalton had a shotgun snap from Russell Bodine take him by surprise and end up a recovered fumble by the Ravens to negate a interception created by Carlos Dunlap’s deflection and picked off by Rey Maualuga.

“That’s a huge error in the football game to not get points,” said Marvin Lewis, who benched Bodine for T.J. Johnson during multiple series at the beginning of the third quarter before eventually reverting.

The Bengals will next host the Philadelphia Eagles on Sunday, while the Ravens (6-5)– who lead the AFC North– will host the Miami Dolphins that day.

BALTIMORE, MD – NOVEMBER 27: Wide receiver Steve Smith #89 of the Baltimore Ravens and outside linebacker Vontaze Burfict #55 of the Cincinnati Bengals are seperated by referee Clete Blakeman #34 in the first quarter at M&T Bank Stadium on November 27, 2016 in Baltimore, Maryland. (Photo by Rob Carr/Getty Images)