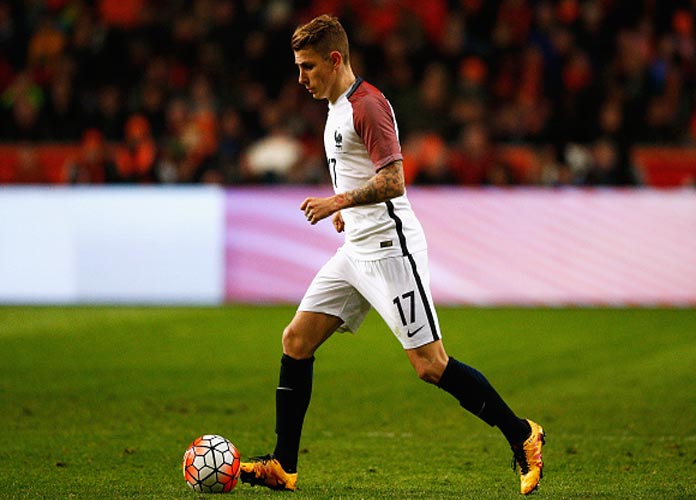 AMSTERDAM, NETHERLANDS - MARCH 25: Lucas Digne of France looks on during the International Friendly match between Netherlands and France at Amsterdam Arena on March 25, 2016 in Amsterdam, Netherlands. (Photo by Dean Mouhtaropoulos/Getty Images)

The 22-year-old Frenchman, who impressed on loan at Roma last season, has signed a five-year contract with a buy-out clause set at £50 million ($65.9 million). He will arrive in Barcelona on Thursday to undergo a medical.

Digne joined PSG from Lille in 2013 as one of the most promising young defenders in Ligue 1. He also made the squad for the 2016 European Championship, where France lost to Portugal 1-0 in the final, but did not play in a game. Barcelona released a statement saying:

“[Digne’s] pace on the left makes him a threat going forward as does his excellent technical quality on the ball. Provided he passes his medical, he will be presented to the public at the Nou Camp on Thursday afternoon followed by his first press conference.”

Barça have paid an initial 16.5 million euros ($18.3 million) with another four possible according to individual and team results.

Digne follows countryman Samuel Umtiti to the club after Barcelona announced the Lyon defenseman’s transfer on Tuesday, as the Copa del Rey champions continue to prepare for their opening-season match against Celtic in Dublin on July 30.

Umtiti signed with the Catalan team for 25 million euros ($27.8 million). Versatile Brazilian defender Adriano is now likely to leave Barcelona as a result of Digne joining, and he is close to agreeing a move to Serie A side Lazio.

Digne contributed three goals and five assists in 33 appearances during his season in Roma. He and Umtiti have been brought in to compensate for the departures of Dani Alves and Marc Bartra. In total, Digne has played 148 games for Lile, PSG and Roma, scoring six goals and recording 13 assists.

Spanish midfielder Denis Suarez, 22, was Barcelona’s first new arrival of the summer, having come from Villareal. Barca are also expected to sign a new right-back this summer, with the club no longer having a top player in the position after Brazilian Dani Alves left for Juventus on a fee transfer.

Barcelona president Josep Maria Bartomeu stated just last month that the club had €60 million ($66.7 million) available to spend on new signings in addition to any revenue raised through sales.

AMSTERDAM, NETHERLANDS – MARCH 25: Lucas Digne of France looks on during the International Friendly match between Netherlands and France at Amsterdam Arena on March 25, 2016 in Amsterdam, Netherlands. (Photo by Dean Mouhtaropoulos/Getty Images)