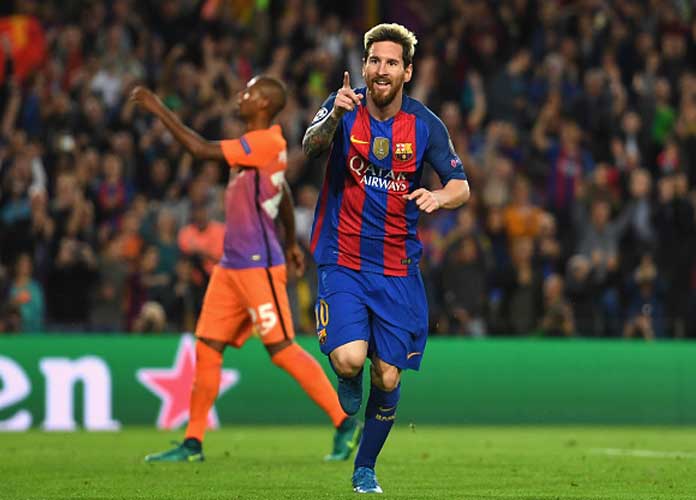 BARCELONA, SPAIN - OCTOBER 19: Lionel Messi of Barcelona celebrates after scoring his third and his team's third goal of the game during the UEFA Champions League group C match between FC Barcelona and Manchester City FC at Camp Nou on October 19, 2016 in Barcelona, Spain.

FC Barcelona has sealed one of the world’s largest soccer jersey sponsorships after signing a four-year deal worth at least $235 million with Japanese retailer Rakuten.

Rakuten is a top-tier global company that is gradually becoming a leader in e-commerce, communications, digital content and FinTech services for consumers and businesses alike.

The agreement was formalized Wednesday, in a ceremony held at the Auditorium 1899, with Barcelona President Josep Maria Bartomeu, Vice President of Marketing and Media Manel Arroyo, and Rakuten Chairman and CEO Hiroshi Mikitani all in attendance.

“We are delighted with our agreement with Rakuten, a global brand in innovation whose experience and know-how in the fields of big data, communications and e-commerce will contribute to the future success of FC Barcelona,” said Bartomeu in his statement.

“This agreement puts us at the forefront of sports club sponsorships, which has always been an objective for the current Board of Directors. We hope this partnership between Rakuten and FC Barcelona brings unparalleled sporting and commercial success, and helps the club achieve its goal of being a reference point worldwide”.

Mikitani, meanwhile, stated: “This partnership opportunity is set to power our global brand strategy and, more importantly, as the Global Innovation and Entertainment Partner, we are looking to bring the collective power of our brands like Viber, Wuaki, Ebates, Kobo, PriceMinister to build a cool innovation framework that will deliver innovative solutions and services to fans, members and players”.

He continued: “I am very excited about joining the Barça community as I have personally followed the team for decades and have long admired their unique playing style and professionalism, their commitment to success and their culture of nurturing young talent – all values we share at Rakuten”.

The deal links the Spanish club with Rakuten from the 2017/18 season until the 2020/21 season, with the option of a further one-year extension. As a result of the agreement, Barcelona will annually receive €55 ($58.75 million) plus title incentives for the duration of the contract. This agreement will be ratified at an Extraordinary Meeting of the Club Members to be held in the near future.

This new sponsor ends Barcelona’s long-running search for a new company after its partnership with Qatar Airways, worth approximately €30 million ($32 million) per year, was extended for a year in July after expiring at the end of last season.

The Rakuten deal is one of the largest for on-shirt advertising, and is roughly the same amount United earns in its £47million-a-year ($58 million) contract with US car manufacturer Chevrolet. Barcelona has also signed deals to feature Turkish electronics brand Beko on shirtsleeves and US semiconductor company Intel on the inside of their shirts.

According to Repucom, a sports consultancy, corporate spending on soccer jersey sponsorship in Europe’s top six divisions has doubled since 2010, reaching €830 million ($1.032 billion) this year.

BARCELONA, SPAIN – OCTOBER 19: Lionel Messi of Barcelona celebrates after scoring his third and his team’s third goal of the game during the UEFA Champions League group C match between FC Barcelona and Manchester City FC at Camp Nou on October 19, 2016 in Barcelona, Spain. (Photo by Shaun Botterill/Getty Images)