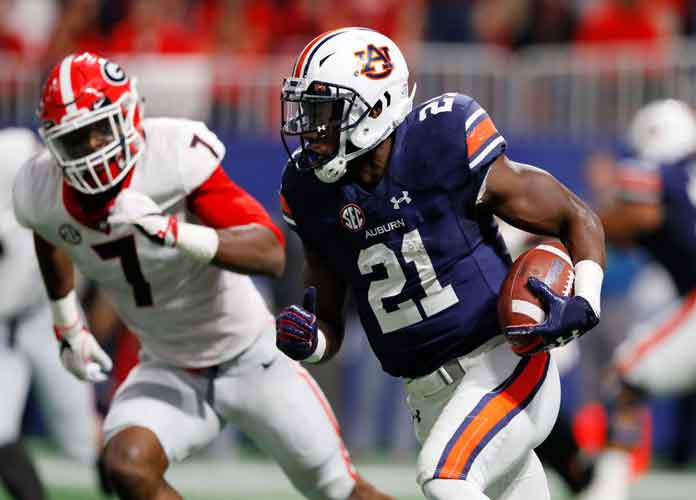 ATLANTA, GA - DECEMBER 02: Kerryon Johnson #21 of the Auburn Tigers runs the ball during the first half against the Georgia Bulldogs in the SEC Championship at Mercedes-Benz Stadium on December 2, 2017 in Atlanta, Georgia. (Photo by Kevin C. Cox/Getty Images)

Kerryon Johnson has rapidly become the central point of Auburn’s offense this year.

For his achievements, he was named the SEC’s Offensive Player of the Year on Monday.

The 6-foot, 212-pound junior returned from hamstring injury that sidelined him from the majority of the first three games of the season. He finished 2017 as the Tigers’ primary tailback, rushing for 1,320 yards and 17 touchdowns while averaging 120 yards per game, which led the conference. He rushed for 100 yards or more in four consecutive games before a season-low 44 yards while playing with a bum shoulder against Georgia in the SEC Championship Game last week.

Johnson, 20, helped lead Auburn to a 10-3 record, an SEC West championship and two victories against No. 1 teams in the College Football Playoff rankings: Georgia and Alabama. The Tigers beat the Bulldogs 40-17 on Nov. 11, but lost to Georgia 28-7 on Saturday.

According to some reports, Kerryon and Kamryn Pettway are both dealing with various injuries entering bowl season. Johnson is coping with rib and shoulder injuries that hindered him in the SEC Championship Game, while Pettway is still recovering from a fractured shoulder blade he sustained against Arkansas earlier this season.

“I talked to him earlier today,” Auburn coach Gus Malzahn said of Johnson on Sunday during a Peach Bowl teleconference. “He’s definitely still banged up. You talk about he’s just really the heart and soul of our team. The courage he showed, and he wasn’t 100 percent. He tried his best. The good thing is we’ve got almost a month before we play, allowing not only (Johnson) to heal up but some of those other guys to heal up.”

ATLANTA, GA – DECEMBER 02: Kerryon Johnson #21 of the Auburn Tigers runs the ball during the first half against the Georgia Bulldogs in the SEC Championship at Mercedes-Benz Stadium on December 2, 2017 in Atlanta, Georgia. (Photo by Kevin C. Cox/Getty Images)