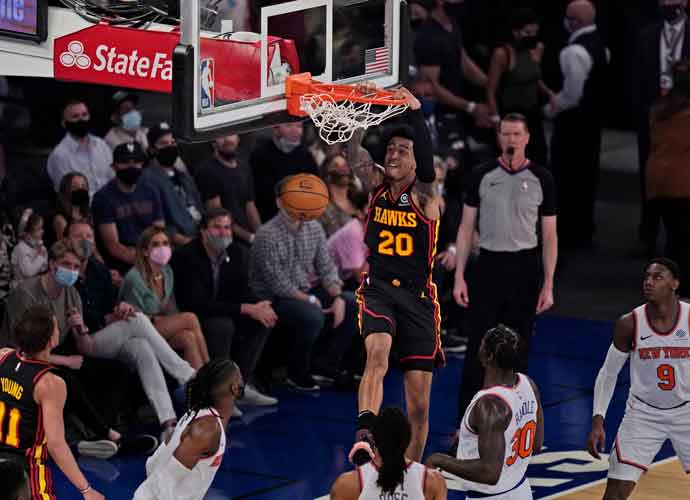 NEW YORK, NY - MAY 23: Atlanta Hawks' John Collins dunks during the first half of Game 1 of an NBA basketball first-round playoff series against the New York Knicks on May 23, 2021 in New York City. NOTE TO USER: User expressly acknowledges and agrees that, by downloading and or using this photograph, User is consenting to the terms and conditions of the Getty Images License Agreement. (Photo by Seth Wenig - Pool/Getty Images)

Trae Young and the Atlanta Hawks continued to frustrate the New York Knicks in Game 4.

Led by Young, the Hawks torched the Knicks on Sunday. Young scored 27 points and John Collins added 22 points as the Hawks cruised to a 113-96 win over the Knicks. With Sunday’s win in the books, Atlanta now holds a 3-1 series lead over New York.

“We have so many guys who are skilled with the basketball,” Collins said after the Hawks’ win. “We have great chemistry with each other. I think the sky’s the limit with this team when we do the right things.”

The Hawks will now look to win Game 5 at the Garden to clinch their first playoff series victory since 2016.

“Obviously, we’re excited to win a game,” Young said. “But the job’s not done. It’s not done until the series is over. We have to have that same mentality, that same approach, try to go up to New York and finish it there.”

“I loved it,” Collins said after the game. “I felt like from the very start, we came out with the mindset that we were not going to let their physical game get to us. We matched their physicality and played our game.”

On the other hand, the Knicks were unable to answer or keep up with the Hawks’ offense. Knicks All-Star Julius Randle’s shooting woes continued. Randle had his highest-scoring output of the series with 23 points but shot a measly 7 of 19 from the field. R.J Barrett added 21 points and Derrick Rose had 18 points for New York. Despite the loss, Randle remains confident in his team’s ability to come back in the series.

“We’ve got a Game 5 back at home to extend this series,” Randle said. “I love our chances. It’s not over. It’s not nearly over.”

Game 5 will be hosted at Madison Square Garden, and it is a must-win for New York if they want to stay alive in the series.