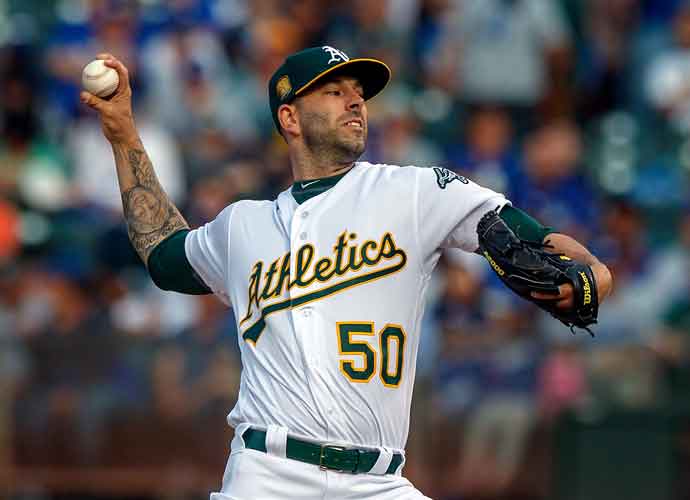 OAKLAND, CA - AUGUST 08: Mike Fiers #50 of the Oakland Athletics pitches against the Los Angeles Dodgers during the first inning at the Oakland Coliseum on August 8, 2018 in Oakland, California.

Oakland Athletics pitcher and former Astros‘ pitcher Mike Fiers has reportedly received death threats after revealing that Houston stole signs during the 2017 playoffs in a report to The Athletic released in November. Fiers was a member of the Astros during that time and exposed Houston’s use of cameras to illegally steal signs. Following the season, he signed with Detroit and was later traded to Oakland.

“Whatever, I don’t care. I’ve dealt with a lot of death threats before. It’s just another thing on my plate,” Fiers told the San Francisco Chronicle on Thursday. “If I’m worried about any retaliation, I’m not going to be ready for the season.”

During a press conference on Tuesday, MLB commissioner Rob Manfred said, “We will take every possible step to protect Mike Fiers wherever he’s playing, whether it’s in Houston or somewhere else.”

Redsox legend David Ortiz bashed Fiers as he spoke to the media from the team’s spring training facility in Florida Thursday.

“I’m mad at this guy, the pitcher who came out talking about it,” Ortiz told ESPN. “And let me tell you why. Oh, after you make your money, after you get your ring, you decide to talk about it. Why don’t you talk about it during the season when it was going on? Why didn’t you say, ‘I don’t want to be no part of it?’ So you look like you’re a snitch. Why you gotta talk about it after? That’s my problem. Why nobody said anything while it was going on?”

Fiers hasn’t responded to Ortiz and told The Athletic on Wednesday “I can defend myself” and doesn’t need extra security from the MLB. However, he did mention his concern for the safety of his family, according to the Chronicle. Fiers also claimed he was heavily involved with the Astros’ operation and accepts full responsibility.

“I said from the beginning, ‘I’m not away from this. I was part of that team, I was one of those guys,'” Fiers said. “Suspensions, fines — I’m willing to take as much punishment as they do. If they ask me to [return the ring], it’s not the end of the world.”