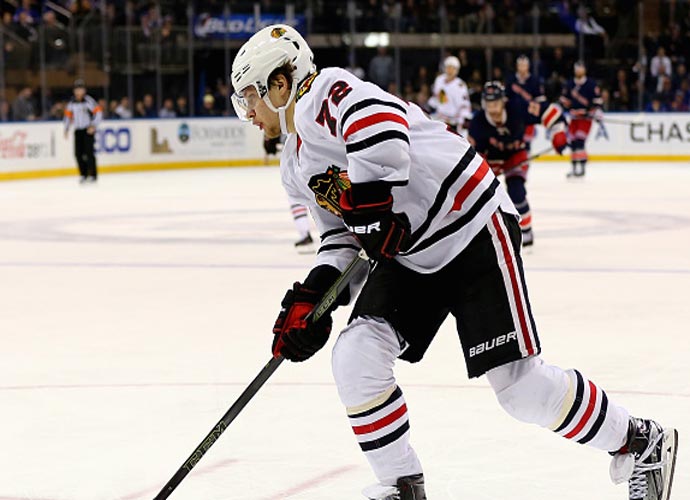 Rookie left winger Artemi Panarin, 24, scored his first hat trick with the Chicago Blackhawks on Wednesday night to lead them to a 5-3 victory over the New York Rangers at Madison Square Garden in New York.

“He’s been good for us this year,” Blackhawks captain Jonathan Toews said of Panarin, who leads all rookies with 22 goals and 57 points. “Tonight, he scored a big goal with the second unit that went out for the power play. He wants to score and when he finally gets a few here tonight, he plays with so much more confidence and energy. When he goes out there, things happen every single shift. You saw that again tonight.”

Andrew Desjardins and Andrew Shaw also scored for Chicago, which blew a two-goal lead. The Blackhawks also scored three power-play goals against the Rangers, including one by Panarin with three minutes left to play and an empty-netter.

Kevin Hayes, Derick Brassard and Dan Boyle scored for New York, which came back from a 2-0 deficit to gain a 3-2 lead early in the third period. Rangers captain Ryan McDonagh also returned after missing four games due to a concussion. This was New York’s first regulation home loss in 11 games.

New York received a four-minute power play at 19:34 of the second period after Blackhawks forward Vincent Hinostroza got his stick up in the face of Rangers center Dominic Moore.

Defenseman Marc Staal did not play; the Rangers announced during the game that his wife gave birth to their second child, a daughter.

The Rangers (32-19-6) will visit the Toronto Maple Leafs on Thursday, while the Blackhawks (38-18-5) will next visit the Minnesota Wild on Sunday.