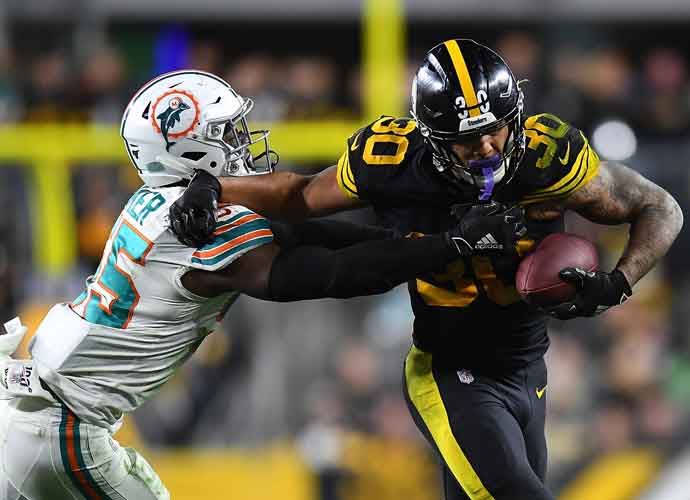 PITTSBURGH, PA - OCTOBER 28: James Conner #30 of the Pittsburgh Steelers is wrapped up by Jerome Baker #55 of the Miami Dolphins during the fourth quarter at Heinz Field on October 28, 2019 in Pittsburgh, Pennsylvania. (Photo by Joe Sargent/Getty Images)

After losing Kenyan Drake to the Las Vegas Raiders earlier this offseason, the Arizona Cardinals were severely lacking in their running game. However, the team added some much-needed depth to its backfield on Tuesday. According to ESPN, former Pittsburgh Steelers running back James Conner has agreed to a one-year deal with the Cardinals. He will join the shifty and elusive Chase Edmonds in Arizona’s backfield.

Although Conner has been slightly more effective than Edmonds (and certainly more experienced), the two running backs are expected to split reps and opportunities in head coach Kliff Kingsbury’s offense. By design, Arizona’s offense not only asks the running backs to shoulder lots of responsibility in the running game, but the Cardinals also love to throw check-down passes and short routes to the team’s speedsters out of the backfield.

Conner has never been the best pass catcher in the world, often leaving the field on third down so that Pittsburgh could utilize guys with better hands on obvious passing downs. In his rookie year, Conner didn’t catch one pass for the Steelers in 14 games, though he only received 32 carries on the season.

Conner’s best statistical season came in 2018, both from a running and receiving standpoint. In 13 games, he posted 973 rushing yards on 215 attempts (4.5 yards per carry) and a whopping 12 rushing touchdowns. And after being a complete non-factor in the passing game one year prior, Conner caught 55 passes to the tune of 497 receiving yards and one additional score.

From a fantasy football point of view, it was amazing to see Conner finish as the sixth-best running back in PPR formats in just his second season in the league. He averaged a monstrous 21.5 fantasy points per game and finished the season with 280 total fantasy points. Conner tallied double-digit points in all but one contest that season. The only running backs to finish with more fantasy points than Conner in 2018 were Saquon Barkley, Christian McCaffrey, Todd Gurley, Alvin Kamara and Ezekiel Elliott. Pretty elite company to be in.

Conner will reunite with Cardinals running backs coach James Saxon, who was his position coach in Pittsburgh in 2017 and 2018. That could bode well for the 25-year-old in 2021 considering Conner’s lone Pro Bowl appearance came when Saxon was helping him develop his game.

Expectations were incredibly high for Conner as he geared up for his third season in 2019. However, injuries and a weak offensive line hindered his production. He only suited up for 10 games that year, and while he did average a solid 14.6 fantasy points per game, his overall statistical output took a significant hit. Conner finished the season with 464 yards on 116 carries (4.0 yards per carry), along with four rushing scores. What saved his season was the three touchdowns he scored in the passing game.

Last season, the Steelers became much more focused on the passing game than the running game. Injuries and inconsistency continued to plague the 25-year-old back, who finished the 2020 season with 169 carries for 721 yards and six touchdowns while adding 35 receptions for 215 yards in 13 games (11 starts). He averaged 12.7 fantasy points per game, his worst total since his rookie year.

Entering his fifth season in the NFL, Conner could be a hit-or-miss running back in fantasy football. The Cardinals’ offensive line is superior to the Steelers’ line, which will certainly create more holes for Conner. However, his injury history is a real concern. Not to mention, when he was in Pittsburgh, he never had to share the backfield with someone as talented as Edmonds.

Although Edmonds has never come close to eclipsing 1,000 rushing yards (like Conner almost did in 2018), Edmonds is probably the superior fantasy option heading into the 2021 season. Conner may be just as strong an option on first and second down, but what separates these two players is the ability to make plays in obvious passing situations. Edmonds should be Arizona’s third-down back and catch plenty of passes from the improving Kyler Murray. That said, Conner probably has the edge in short-yardage and goal-line situations. He could very easily vulture a few touchdowns from Edmonds. Still, Edmonds is the guy to own in Arizona’s backfield.

Overall, Arizona absolutely needed to add depth at the running back position. Adding a veteran like Conner will help this offense get to the next level in 2021.