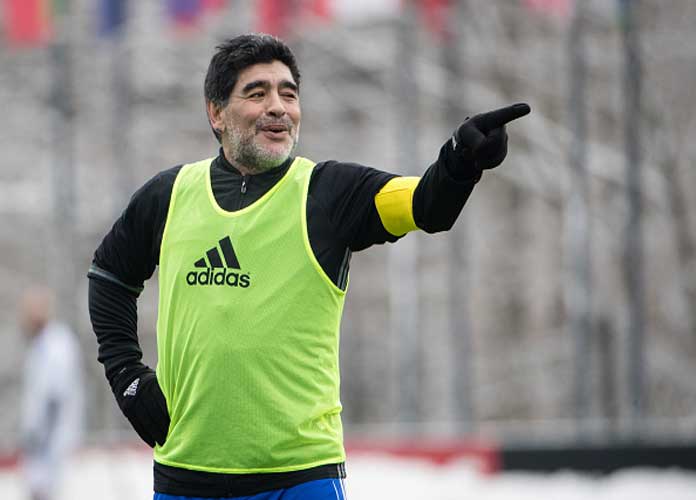 ZURICH, SWITZERLAND - JANUARY 09: Diego Maradona reacts during a FIFA Team Friendly Football Match at the FIFA headquarters prior to The Best FIFA Football Awards 2016 on January 9, 2017 in Zurich, Switzerland.

Argentinian President Alberto Fernandez tweeted his sorrows as he said in Spanish, “You took us to the top of the world. You made us immensely happy. You were the greatest of all. Thanks for having existed, Diego. We will miss you for life.”

Maradona was regarded as one of the greatest soccer players to have played. He is up there with fellow soccer great Pele and was widely regarded as the “golden boy” of Argentina.

Maradona had famously captained the 1986 Argentinian national team that won the World Cup that included two famous goals that were scored by Maradona.

Both of the famous goals came in their semifinal matchup against England. The first was the “Hand of God” where Maradona punched the ball into England’s goal to give them the lead. The referees let the goal stand despite the protest by the English players. Maradona made their second goal that became known as the “goal of the century” – Maradona ran 60-yards past four English defenders and faked the goalie to score. That goal showcased his remarkable individual skills and famous ability to weave past defenders to score.

Maradona would later reflect on those goals and say in his biography that that match was for revenge. “It was our way of recovering ‘Las Malvinas,’’ he said, a reference to the Falkland war between Argentina and Great Britain that was fought in 1982.

However, Maradona’s later playing years were marked by scandals and drug use. In 1991, he was given a 15-month ban after failing a doping test. He failed another doping test for stimulants for the 1994 World Cup. In 2000, he was hospitalized and doctors said that his heart was pumping at less than half capacity. Urine and blood sample revealed that there was cocaine in his system. In 2004, he was sent to the emergency for his drug use and went to Cuba for treatment. In 2005, he underwent successful gastric bypass surgery in Colombia.

In 2008, he was announced as the manager of the Argentina national team after the resignation of Alfio Basile. Following Argentina’s disappointing 2010 World Cup results led to Maradona’s tenure as the manager to end. Despite this, he continued to manage different soccer teams and was the recent manager of the team Gimnisia de La Plata.

A few weeks ago, he underwent successful surgery for a blood clot in his brain.

There will be three days of national mourning in Argentina according to President Alberto Fernandez after the news of Diego Maradona’s death 🙏 🇦🇷 pic.twitter.com/egQZg0UwEg

Bernie Sanders’ Inauguration Mittens Turned Him Into A Meme Once Again

Who Is Ashley Biden? America’s New First Daughter To Advocate For Social Justice