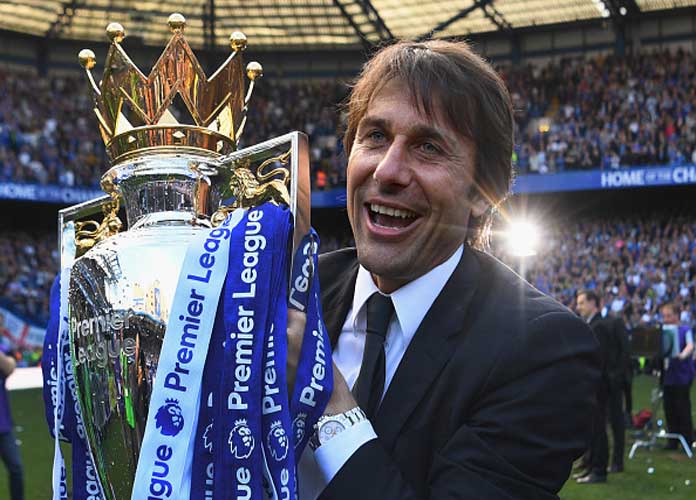 LONDON, ENGLAND - MAY 21: Antonio Conte, Manager of Chelsea poses with the Premier League Trophy after the Premier League match between Chelsea and Sunderland at Stamford Bridge on May 21, 2017 in London, England. (Photo by Michael Regan/Getty Images)

Antonio Conte praised Alvaro Morata for his debut with Chelsea, a pre-season friendly matchup against Bayern Munich in Singapore on Tuesday, despite the Blues losing the game 3-2.

The Italian manager said it is still too soon to tell how much impact Morata — who entered the International Champions Cup contest as a second-half substitute — will have on Chelsea’s roster this upcoming season.

“It’s too early to speak about the impact of Morata,” Conte said of the Spanish forward, who signed a five-year deal with Chelsea last week in a transfer from Real Madrid. “He has only been with us for two days and he needs time to work and find his feet and to understand our way of playing.”

“But he showed a will to win, to fight and adapt to our style of play. For us, he’s a good buy. We need to give him time to adapt, but we must be pleased with his performance today.”

Morata, 24, contributed an assist on Chelsea’s second goal in Tuesday’s game, which Michy Batshuayi scored in the second half. The Spaniard joined Chelsea in a club-record £60 million ($78 million) on July 19.

Conte’s comments come after it was announced earlier Tuesday that Chelsea’s 21-year-old Brazilian midfielder Kenedy would miss Tuesday’s game and be sent home for posting a series of offensive comments about China on social media.

“It’s a pity because the player was sorry about this situation,” Conte said. “It’s a difficult situation for the club and this is why we made this decision.”

“The player understood his mistake and is sorry for what happened. Now, we must go on.”

Chelsea next face Inter Milan on Saturday in Singapore as part of their pre-season tour in Asia.

LONDON, ENGLAND – MAY 21: Antonio Conte, Manager of Chelsea poses with the Premier League Trophy after the Premier League match between Chelsea and Sunderland at Stamford Bridge on May 21, 2017 in London, England. (Photo by Michael Regan/Getty Images)