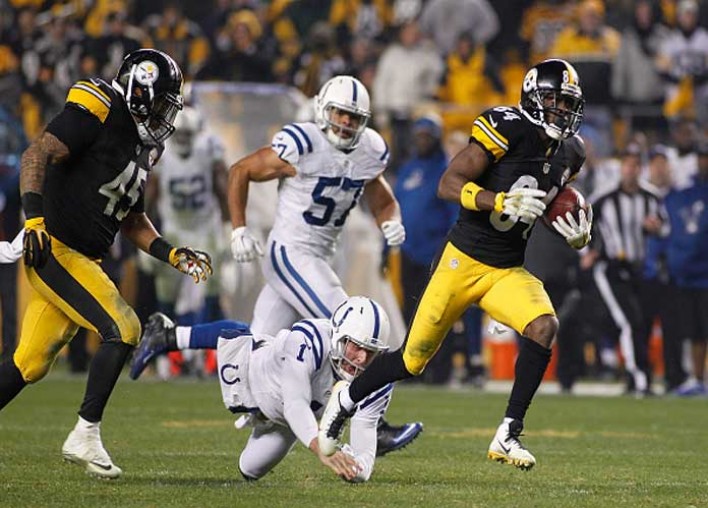 PITTSBURGH, PA - DECEMBER 6: Punter Pat McAfee #1 of the Indianapolis Colts attempts to tackle Antonio Brown #84 of the Pittsburgh Steelers as he returns a punt for a 71 yard touchdown in the fourth quarter of the game at Heinz Field on December 6, 2015 in Pittsburgh, Pennsylvania. (Photo by Justin Aller/Getty Images)

Antonio Brown will be an Oakland Raider. Just days after trade talks with the Buffalo Bills collapsed, the Pittsburgh Steelers have found a way to ship out the Pro Bowl wide receiver who they believe to be the cause of their locker room drama.

The Raiders will send a third-round and a fifth-round pick in this year’s draft in exchange for the former sixth-round pick. They’ve also agreed to renegotiate Brown’s contract by increasing his salary from $38.9 million to $50 million.

Per source, Antonio Brown’s three-year haul will increase from $38.925 million to $50.125 million, per source. No new years will be added.

In the new deal, $30 million of Brown’s contract would be guaranteed. Previously, none of it was. According to ESPN, with incentives, Brown could pull in over $54 million in the next three years.

Raiders are adding money to Antonio Brown’s deal: He now will have three years worth $50.125 million – with incentives to go to $54.125 million, per source.

Where there was no guaranteed money there’s now $30.125 million guaranteed, per source.

While the contract upgrade may seem ridiculous, the Raiders can afford it after giving up very little to acquire the pass-catcher. In 2018, Brown caught 104 passes for 1,297 receiving yards and a league-high 15 touchdown catches. Though at 30, it may seem like his best days are behind him, he possesses the skills to age gracefully.

Brown also seems more than happy to be in Oakland. After shooting down the Buffalo trade, he took to Instagram to celebrate this one. Moments before news of the swap broke, Brown posted a photo of himself in a Raiders uniform.

After a lackluster year, coach Jon Gruden looks to fix up the Oakland roster. He seems to still have confidence in quarterback Derek Carr and may add another weapon this offseason. Some around the league think it’s perfectly reasonable that Le’Veon Bell could receive the same contract the Raiders gave Brown. Adding Bell is another high-risk, high-reward move for an Oakland squad in need of hype for a move to Las Vegas.