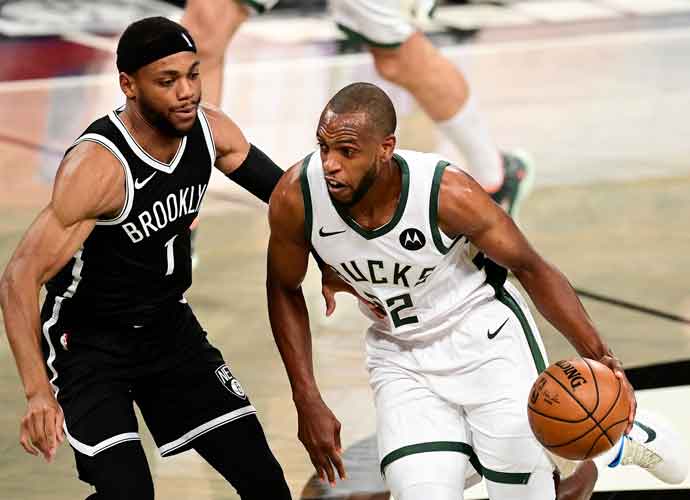 NEW YORK, NEW YORK - JUNE 05: Khris Middleton #22 of the Milwaukee Bucks drives to the basket against Bruce Brown #1 of the Brooklyn Nets in Game One of the Second Round of the 2021 NBA Playoffs at Barclays Center on June 05, 2021 in New York City. NOTE TO USER: User expressly acknowledges and agrees that, by downloading and or using this photograph, User is consenting to the terms and conditions of the Getty Images License Agreement. (Photo by Steven Ryan/Getty Images)

Giannis Antetokounmpo and Khris Middleton powered the Milwaukee Bucks to a blowout victory over the Brooklyn Nets to force Game 7.

On Thursday, Antetokounmpo scored 30 points and recorded 17 rebounds, while Middleton added 38 points and 10 rebounds as the Bucks easily cruised to a 104-89 win. Middleton was 11-for-16 from the field. He set a new playoff career-high and became the first player in NBA history to record 30 points, 10 rebounds, five assists, five steals and five threes in a playoff game.

“We don’t think about any type of pressure at all,” Middleton said. “It’s a basketball game. It’s as simple as that. I know it’s lose-or-go-home, but at the same time, it’s just basketball. You’ve got to have fun with it. Those moments are fun, you know, when the game’s on the line.”

Kevin Durant attempted to lead the Nets to another come-from-behind victory to close out the series but fell short. The Nets star had a team-high 32 points for Brooklyn. Durant was able to bring Brooklyn to within five on two separate occasions. Durant scored 10 straight points for Brooklyn during a third-quarter stretch to narrow a 14-point deficit to five. However, Middleton responded with six straight points to close out the quarter, including a buzzer-beating putback. And later in the fourth quarter, Durant sparked a Nets 10-0 run to get the game within five points again. Yet again, Middleton responded, drawing a foul on a three-point attempt. He made all three free throws, which started Milwaukee’s own 14-0 run. That put the game out of reach for good.

“He’s a shot maker,” Durant said of Middleton. “You see the shot go through the basket, you get more confidence. He made timely shots for them.”

Durant’s co-star, James Harden, played 40 minutes despite still dealing with a hamstring injury. Harden produced 16 points, five rebounds, seven assists and four steals. Blake Griffin added 12 points for the Nets. Those three players were the only members of the Nets to finish with double-digit points.

The Bucks shot just 7-of-33 from three-point range. Middleton converted 5-of-8 three-point attempts, while the rest of the squad went just 2-of-25. However, Milwaukee made up for their lack of long-range shot-making by outscoring the Nets 26-4 in fast-break points.

“It definitely hurt us,” Nets coach Steve Nash said of the fast-break points. “That’s where they’re really strong. I thought we had some problems getting back in transition.”

Shooting woes also hampered Brooklyn. They weren’t much better than the Bucks from beyond the arc, converting just 9-of-30 attempts. In 36 minutes, Jeff Green scored five points on 2-of-9 shooting. Joe Harris, one of the NBA’s premier three-point shooters, finished just 1-for-4 from deep. And although Durant made 15-of-30 field goals, he only made 2-of-8 shots from three-point range.

Turnovers were another big part of the game. Brooklyn had 16 turnovers, and the Bucks managed to turn those mistakes into 20 points. Although the Nets forced Milwaukee to commit 15 turnovers themselves, Brooklyn only scored eight points off of the Bucks’ turnovers. Milwaukee also outrebounded Brooklyn 36-30 and 15-9 on the offensive glass.

The series now heads back to Brooklyn, where Game 7 will take place. Through the first six games of the series, the home team has won every single time. That bodes well for Brooklyn, who are hoping to make their first Eastern Conference Finals appearance since 2003. If the Bucks win, they will make their second Eastern Conference Finals appearance in the last three years.