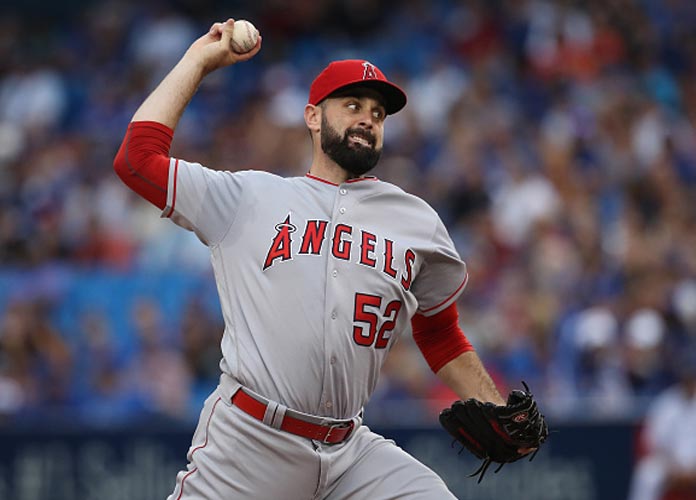 TORONTO, CANADA - AUGUST 24: Matt Shoemaker #52 of the Los Angeles Angels of Anaheim delivers a pitch in the first inning during MLB game action against the Toronto Blue Jays on August 24, 2016 at Rogers Centre in Toronto, Ontario, Canada.

The Los Angeles Angels of Anaheim are all concerned for starting pitcher Matt Shoemaker, the right-hander who is resting in a hospital following surgery to stop bleeding in his skull after a line drive hit him in the head in Sunday’s 4-2 win against the Mariners in Seattle.

“We’re all thinking about him,” Angels center fielder Mike Trout said. “It’s bigger than the game of baseball.”

The Angels defeated the A’s 10-7 in Oakland on Monday, but before the game, they received the news that Shoemaker, who will be 30 later this month, had undergone surgery Sunday night.

Angels general manager Billy Eppler stated the surgery had been successful, and relatively straightforward. He expects Shoemaker to make a full recovery so as to be able to pitch next season.

The right-hander will remain in Seattle, accompanied by team trainer Adam Nevala, for the next few days, and then return to Los Angeles.

“We’ve exhaled a little bit,” Angels Manager Mike Scioscia said. “They hopefully corrected what was causing the bleeding. He’s resting comfortably. Hopefully it looks like everything is taken care of. Now it’s just a recuperation process for Matty. Our thoughts and prayers are with him.”

In the bottom of the second inning of Sunday’s game, Mariners third baseman Kyle Seager hit a line drive, estimated at 105 mph, that struck Shoemaker squarely on the right side of his head. Shoemaker was immediately carried off and initially diagnosed with a laceration, and following CT scans at a local hospital, a skull fracture and hematoma were discovered.

Scioscia said he and many of Shoemaker’s teammates have been texting him.

“I’m just glad he’s talking and texting and reaching out to us,” said Trout, who exchanged texts with Shoemaker on Sunday. “He’s coming home in a few days and we’ll be happy to see him… It’s a scary moment for our team. A scary moment for him. Scary for baseball in general.”

Scioscia said the team is still considering several options for Shoemaker’s replacement. Tim Lincecum, who gave up one run in seven innings in his final start at Triple-A on Sunday, is one possibility. The only other clear options would be Jhoulys Chacin, Brett Oberholtzer or Daniel Wright.

Wright, claimed on waivers from the Cincinnati Reds, was added to the active roster on Monday. The right-hander began most of this season in Triple-A, and made two starts in the majors in June.

The Angels have an off day on Thursday, so they could delay using another starter until one week from Tuesday, at home against the Mariners. After Shoemaker lasted just four outs before needing to leave the game, Jered Weaver came out after four innings on Monday. He had been hit in the hip by a line drive in the third inning, and it caused him too much discomfort to continue after the fourth. He is expected to be fine, however.

“Some guys are doing some really good things to keep us in games,” Weaver said. “It was kind of a weird game yesterday. You don’t know what to do. Do we keep playing or what? It definitely took the wind out of us. The bullpen came in and did a great job yesterday and they did a great job today.”

TORONTO, CANADA – AUGUST 24: Matt Shoemaker #52 of the Los Angeles Angels of Anaheim delivers a pitch in the first inning during MLB game action against the Toronto Blue Jays on August 24, 2016 at Rogers Centre in Toronto, Ontario, Canada. (Photo by Tom Szczerbowski/Getty Images)