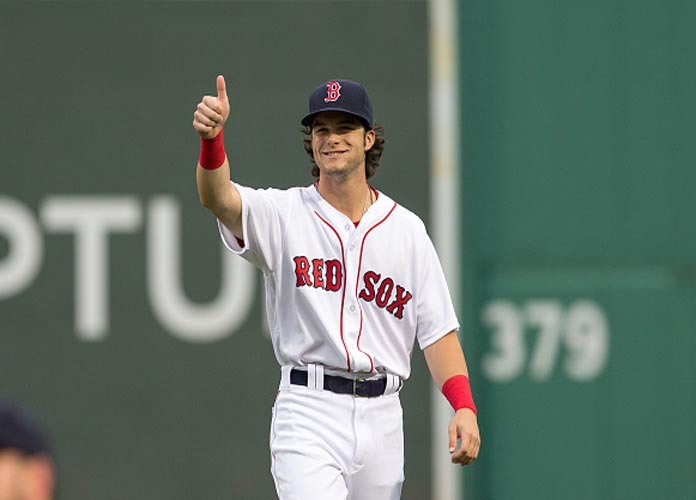 BOSTON, MA - AUGUST 13: Andrew Benintendi #40 of the Boston Red Sox gives a thumbs-up to the crowd before a game against the Arizona Diamondbacks at Fenway Park on August 13, 2016 in Boston, Massachusetts. (Photo by Rich Gagnon/Getty Images)

The Kansas City Royals have their newest left fielder.

The Royals, the Boston Red Sox and the New York Mets have finalized a deal which will send outfielder Andrew Benintendi to Kansas City. In return, the Red Sox are receiving outfielder Franchy Cordero as well as two players to be named later from the Royals, and right-handed pitcher Josh Winckowski and a player to be named later from the Mets. The Mets received one of the top prospects in the Royals’ system, outfielder Khalil Lee.

Benintendi, 26, is entering his fifth year in the big leagues. However, he is coming off of his worst campaign last year, as injury held him to only 14 games played and a .103 batting average in the 2020 pandemic season. That translates to four total hits, production well below what the Royals are hoping for. Since their World Series title in 2015, the team has had little to no success, with a a 26-34 season in 2020 and a 59-103 record in 2019. This Benintendi move appears to be the first step in a process to right the ship.

For the Red Sox, this marks the departure of the last piece of their 2018 starting outfield, which comprised of Benintendi, Jackie Bradley Jr. and Mookie Betts. The trio helped the Red Sox finish the 2018 season with a 108-54 record and a World Series title. Bradley Jr. is currently a free agent and Betts was traded to the Los Angeles Dodgers last year. After finishing in last place in the AL East last season (24-36), the Red Sox find themselves in a rebuilding phase as they attempt to find their roster for the future.