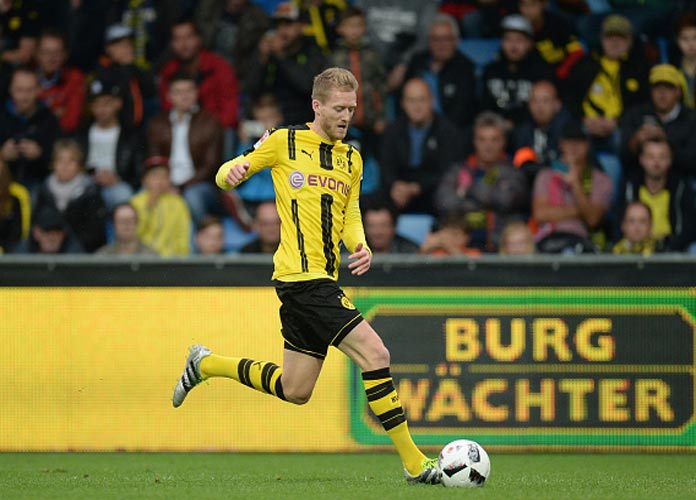 Dortmund made all the early running, with sharp passing and deft maneuvers through Madrid’s defense, but the German hosts’ finishing was poor.

Madrid goalie Keylor Navas made a good save of Gonzalo Castro’s free-kick, while Ousmane Dembele twice shot over the bar.

The visitors opened scoring in the 17th minute, when Gareth Bale’s back-heel set up Cristiano Ronaldo for a relatively easy, right-footed shot from close range.

Dortmund continued to fight back and eventually tied two minutes before half-time, when Castro’s free-kick was batted out by Navas and hit Raphael Varane, bouncing back into the keeper’s net, with Pierre-Emerick Aubameyang on hand to make sure the effort went over the line.

Varane made up for it, however, in the second half when he fired home from close range after Karim Benzema’s shot rebounded off the woodwork, although Schurrle equalized again following an assist from 18-year-old American Christian Pulisic, who raced down the right sideline and crossed for his teammate to drive a spectacular left-footed shot into the top corner past Navas.

Navas, a Costa Rican who missed this summer’s Copa America Centenario due to an Achilles injury, still appeared somewhat weak on Tuesday.

The point each kept both teams on course to qualify from Group F, while their second matchup at the Estadio Santiago Bernabeu in December will decide who qualifies for the top seed.

Ronaldo put on a great performance Tuesday, just days after being substituted 20 minutes before the end of Madrid’s 2-2 draw with Las Palmas last weekend. The 31-year-old Portuguese had been evidently quiet since his angry outburst at his own manager, Zinedine Zidane, following that game. Ronaldo was criticized for his performance in the media, as well as his behavior. Spanish newspaper Diario Sport claimed this is the striker’s worst ever start to a season.

Dortmund manager Thomas Tuchel was asked about playing an out-of-shape Ronaldo in the pre-match news conference. “You cannot declare that Cristiano Ronaldo is not on form, full stop,” Tuchel said.

Tuchel continued, praising the Portuguese: “Who said Cristiano is out of form? And what does that mean? I can’t give a concrete answer but Cristiano is one of the best players in the world. He is an incredible player, a born winner.”

The Dortmund manager has a young team to lead, with players like Mario Gotze, Aubameyang and Dembele, all of whom surely have their best years still ahead of them. The German club has done well this season, routing both Legia Warsaw and SV Darmstadt 6-0, as well as Wolfsburg 5-1.

However, Dortmund must eventually face German powerhouse Bayern Munich, who have a 100 percent record at the beginning of this season. Dortmund will surely struggled against Munich.

Dembele reportedly turned down both Leicester and Barcelona to join Dortmund this past summer. The 19-year-old France winger played well Tuesday, though still seemed like he could perfect his game.

Dortmund next face Bayer Leverkusen on Saturday, while Real Madrid will play Eibar on Sunday.