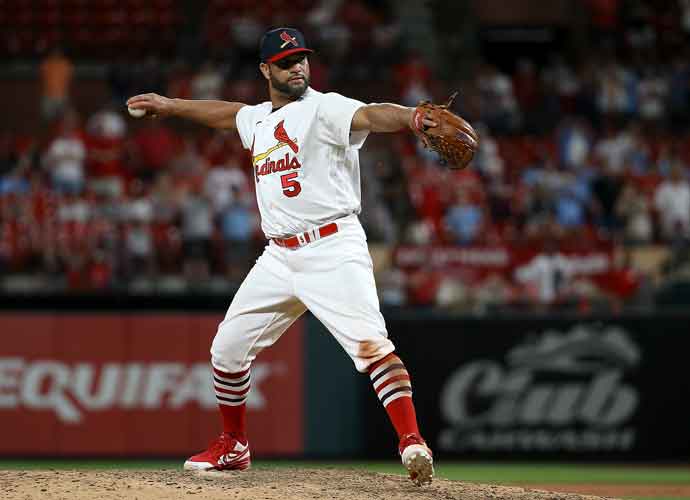 ST. LOUIS, MO - MAY 15: Albert Pujols #5 of the St. Louis Cardinals pitches during the ninth inning against the San Francisco Giants at Busch Stadium on May 15, 2022 in St. Louis, Missouri. (Photo by Scott Kane/Getty Images)

Just when you thought Albert Pujols had accomplished everything he possibly could on a baseball field, he goes out and marks his first pitching appearance.

Of course, known for his big bat, Pujols toed the rubber for the first time in his 22-year MLB career Sunday as he closed out St. Louis’ 15-6 rout of San Francisco. It was extra special as the win gave Adam Wainwright and Yadier Molina the MLB record for wins by a starting battery (203).

“It’s such an honor to be part of this record,” Molina said.

Pujols entered to pitch the ninth inning and surrendered a three-run homer to Luis Gonzalez and a solo shot to Joey Bart, but he did close out the game.

“A dream come true to say that I did it,” said Pujols. “It was fun. It wasn’t fun giving up two bombs. I think the fans had a good time. I’m sure the guys that took me deep did, too.”

Molina homered and drove in four, while Wainwright tossed six innings of three-hit, two-run ball with five strikeouts and two walks for the Cardinals, who took two of three in the series.

Pujols, 42, became the oldest player to make his pitching debut since Lena Blackburne (42) in 1929 for the White Sox.