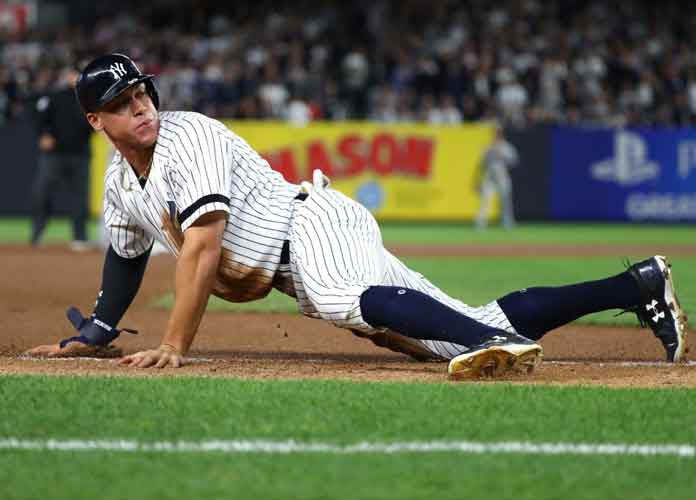 NEW YORK, NY - OCTOBER 03: Aaron Judge #99 of the New York Yankees slides safe to third base after an error by Minnesota Twins during the seventh inning in the American League Wild Card Game at Yankee Stadium on October 3, 2017 in the Bronx borough of New York City. (Photo by Al Bello/Getty Images)

Aaron Judge Among Six Yankees To Test Positive For COVID-19

The positive tests forced the postponement of New York’s home game against the Boston Red Sox. The Red Sox game was seen as the start of the second half of the season. “Following positive COVID-19 tests within the Yankees organization, tonight’s game between the Yankees and the Red Sox at Yankee Stadium has been postponed to allow for continued testing and contact tracing,” the team announced. “MLB will continue to provide scheduling updates as available.”

Following positive COVID-19 tests within the Yankees organization, tonight’s game between the Yankees and the Red Sox at Yankee Stadium has been postponed to allow for continued testing and contact tracing. MLB will continue to provide scheduling updates as available.

This is the second outbreak on the team this year despite the team exceeding the 85% vaccination threshold that allows teams to enjoy relaxed protocols. In May, more than a half-dozen Yankees coaches, including pitching coach Matt Blake, third-base coach Phil Nevin and first-base coach Reggie Willits, tested positive.

“I guess the last year, year and a half, has in some ways kind of prepared you for this kind of stuff,” manager Aaron Boone said. “Certainly disappointing and frustrating, and don’t want to be sitting here talking about this, and desperately want us to go back to as normal as possible. But that’s out of our control, too. And we just got to do the best with the circumstances and with the hand that we’re dealt and try to make sure we’re taking care of one eat one another as best we can, taking care of our players and staff as best we can. And hopefully, get through this.”