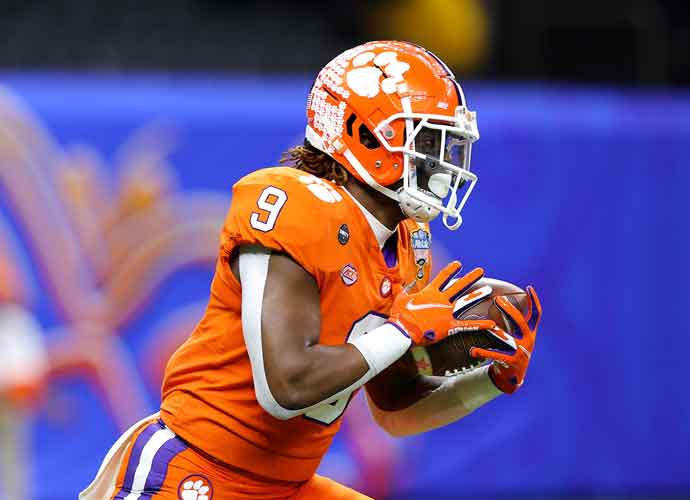 NEW ORLEANS, LOUISIANA - JANUARY 01: Travis Etienne #9 of the Clemson Tigers carries the ball against the Ohio State Buckeyes in the first quarter during the College Football Playoff semifinal game at the Allstate Sugar Bowl at Mercedes-Benz Superdome on January 01, 2021 in New Orleans, Louisiana. (Photo by Kevin C. Cox/Getty Images)

In recent years, the running back position has lost its stock in the NFL draft. The last two drafts have seen just two players from the position selected in the first round in Josh Jacobs (2019: No. 24 overall) and Clyde Edwards–Helaire (2020: No. 32 overall). That means that for fantasy purposes, we can look pretty far down the draft board and find guys who could provide value far sooner than any other position. The 2020 fantasy football season even saw undrafted free agent James Robinson shoot up to RB1 status with the single-win Jaguars. Here are the top running back prospects heading into the 2021 NFL Draft.

Takeaway: As one of the only two projected running backs to go in the first round, Etienne should be a solid fantasy contributor for years to come. Etienne returned to Clemson for his senior season which allowed him to set the all-time ACC rushing record with 4,952 yards. He is above average to elite in all facets of the running game. He has great vision, explosiveness, elusiveness, and runs a 40-time in the 4.3-4.4 range. Etienne has also developed into a very good receiving back, and should get plenty of opportunities on Sundays. However, his pass-blocking could use some work. If he can get better at protecting the quarterback, he will see more snaps in the NFL.

Takeaway: Harris is one of only two prospects projected to go in the first round. He’s been a solid contributor at Alabama for the past four years, and possesses the ability for that to translate to the next level. A tough runner as well as a great pass catcher, Harris gets north and south in a hurry. He’s not a home-run threat, but can take a ton of hits and compile stats both in the rushing and receiving game. He will undoubtedly win people some fantasy contests in the near future.

Takeaway: Williams put up monster numbers last year with 22 total touchdowns and 7.3 yards per carry for the Tar Heels. He was able to do this even with his buddy Michael Carter also putting up solid numbers out of the backfield. Williams is a rare breed who can burst through holes, run over defenders and catch passes with feathery soft hands. Williams will have a very high ceiling if he can find a system that plugs him in on red-zone and goal-line situations, as well as passing-down situations.