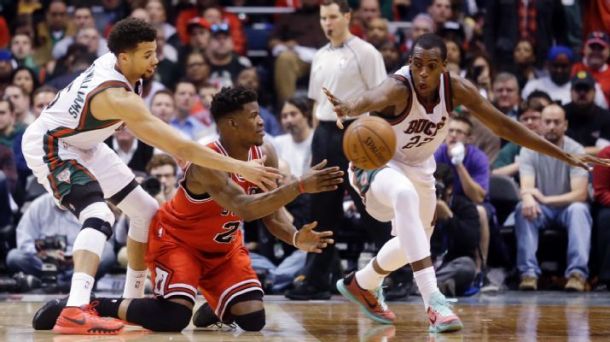 2015 NBA Playoffs Weekend Roundup: Variety of Storylines After Games 3 and 4

The NBA Playoffs continued this weekend with different themes taking place through its landscape. Three series were wrapped up in sweeps, with the Golden State Warriors, Cleveland Cavaliers, and Washington Wizards all moving on to the next round after winning their series 4-0. The Memphis Grizzlies also took a step towards one, as they went up 3-0. The Milwaukee Bucks and Dallas Mavericks had gutsy performances to prevent sweeps, while the Brooklyn Nets made things interesting in their series by grabbing a win. And with the Los Angeles Clippers tying their series up with the San Antonio Spurs, there’s a clear favorite for the most competitive first round series, as at least a Game 6 will be held between the two.

The Brooklyn Nets were able to grab a home victory to kick the weekend off, as they took down the Atlanta Hawks 91-83. With Brooklyn’s stars struggling, Thaddeus Young picked up the slack with his 18 points and 11 rebounds. Atlanta leads the series 2-1, but the series has been anything but the cakewalk many expected for the East’s top seed. Also in the Eastern Conference, the Milwaukee Bucks held off the Chicago Bulls in a hard fought Game 4 by a score of 92-90 to force a Game 5. O.J. Mayo put up 18 points off the bench to lead the Bucks in scoring.

The star-studded Warriors-Pelicans series came to a close, as Golden State completed the sweep by beating New Orleans 109-98. Steph Curry had another big night with 39 points and providing his teammates with 9 assists. Although the Pelicans couldn’t grab a win against the NBA Playoff’s top seeded team, they looked impressive in their first playoff appearance as a group. Probably no one impressed more than Anthony Davis, as he shined in the playoffs once again with 36 points in Game 4.

Saturday’s action wrapped up in Portland as the Memphis Grizzlies took a commanding 3-0 series lead over the Trail Blazers in a 115-109 win. Marc Gasol led Memphis’ effort with 25 points and 7 rebounds to put the Blazers on the brink of elimination.

Sunday’s action was physical, and no game exemplified that than the Cleveland Cavaliers’ 101-93 win over the Boston Celtics. The win gave the Cavs the series win in a 4-0 sweep, but it came at a great cost. Kevin Love is expected to miss the next two weeks after suffering a separated shoulder on a hard foul. LeBron James had himself his usual high quality game, coming close to a triple-double with his 27 points, 10 boards, and 8 assists. Another series came to an end in the East later on in the evening, as the Washington Wizards made quick work of the Toronto Raptors in a 125-94 blowout in Game 4. Although Washington was the lower seed in the series, they looked anything but as they easily won each game of the first round.

The Western Conference picture was not as clear after Sunday’s action. The Los Angeles Clippers, helped by Chris Paul’s 34 points and Blake Griffin’s 20, beat the San Antonio Spurs 114-105 to tie their series at 2 games apiece. The Clippers defense aided in limiting the Spurs to 44% of the field while their offense hit for 54%. In the weekend’s nightcap, the Dallas Mavericks were able to run out the rival Houston Rockets in an 121-109 affair. Houston still leads the series 3-1, but the Mavs’ high powered offensive performance was enough to delay their demise from the NBA Playoffs.

Three games are dotted across the NBA Playoffs picture on Monday. Brooklyn will try to pull off another upset to tie their series against Atlanta in Game 4 (7 pm EST), while Chicago looks to finish off Milwaukee with the series moving back to the “Windy City” in Game 5 (8 pm EST). Out west, Portland will try to avoid a sweep when they take on Memphis in Game 4 at 10:30 pm EST.