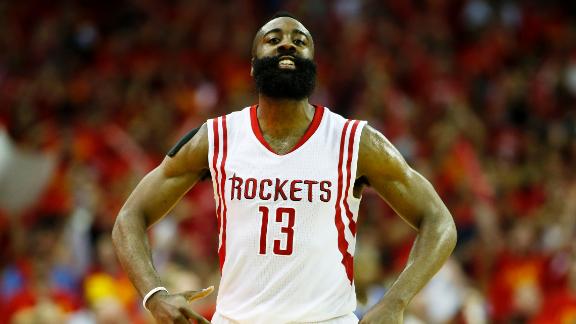 The second round of the NBA Playoffs concluded on Sunday with the Houston Rockets taking Game 7 in a 113-100 victory over the Los Angeles Clippers. The win completed a comeback from a 3-1 deficit to take the series 4 games to 3. It’s only the ninth time in NBA history that a team has won a playoff series after falling behind 3-1.

After Game 6’s frantic comeback from a 19 point deficit to win the game, the Rockets led wire-to-wire on Sunday. Houston was up by 17 after three quarters, putting the game in hand as they closed out in the 4th quarter. James Harden once again had a performance worthy of his MVP candidate season for the Rockets, shooting for 31 points while adding on 8 assists and 7 rebounds. Trevor Ariza had 22 and Dwight Howard scored 16 to add on to the effort. The Clippers, forced to rely heavily on Blake Griffin and Chris Paul due to foul trouble among their depth, got good scoring numbers from their stars but were unable to get the vital performances they needed to prolong their season.

For the Clippers, the series collapse is another dubious moment for a franchise that needed a winning moment. The reaction after the game among basketball fans seemed to revolve around the effort being “so Clippers.” The franchise spent many years floundering while their arena-mate Lakers dominated the spotlight, but had finally come into their own with Chris Paul and Blake Griffin in recent seasons. Even still, the Clippers’ playoff success has been lacking and this season’s collapse keeps the Clippers’ negative stigma alive.

The Rockets, however, will be making a return to the conference finals for the first time since the 1990s. They’re the most recent NBA champion out of the NBA Playoffs’ final four with their 1995 title. But up ahead is a huge task for the Rockets, as they’ll need to take on a Golden State Warriors team that continues to look like the favorite to win the NBA Finals. The Warriors won all four meetings in the regular season by double digits. But the playoffs start everything anew and there’s nothing more James Harden and his teammates want to do than knocking off Steph Curry and the Warriors in a battle of the West’s top two seeds.

The NBA Playoffs will continue on Tuesday night in Game 1 of the aforementioned Rockets-Warriors series. The Eastern Conference Finals will begin on Wednesday when LeBron James and the Cleveland Cavaliers head to Atlanta to take on the top seed Hawks.

Read more about:
basketball NBA NBA Playoffs
Listen to the uInterview Podcast!
Get the most-revealing celebrity conversations with the uInterview podcast!