2015 NBA Finals: Warriors Take Game 5, One Victory Away From A Title - uSports.org 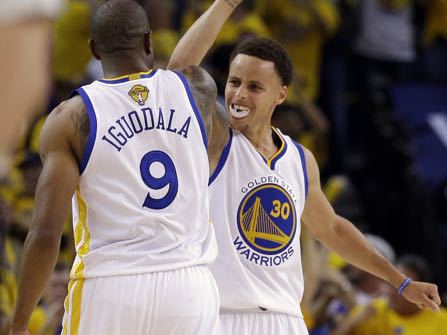 2015 NBA Finals: Warriors Take Game 5, One Victory Away From A Title

The Golden State Warriors took advantage of their home court and exploded on offense in the 4th quarter to win Game 5 of the NBA Finals 104-91 to take a 3-2 series lead over the Cleveland Cavaliers. The Warriors are now just one win away from becoming NBA champions. The road to victory wasn’t easy for Golden State, as LeBron James put in another stellar performance with 40 points, 14 rebounds, and 11 assists for Cleveland. However, Stephen Curry showed his MVP form with 37 points of his own and took over the game late in the 4th quarter.

The game was neck-and-neck throughout the duration. The lead changed hands multiple times, especially during a frantic 2nd quarter where the Warriors came out with a one point lead to end the half. Golden State was finally able to pull away late in the 4th after Curry began hitting his stride and drained a series of three pointers to build an insurmountable lead. After a rough stretch in the series, Curry has regained his MVP form at a critical time. Now the energetic young star is one victory away from his first NBA ring.

The Warriors also got key contributions outside of Curry in the victory. For the second straight game, Andre Iguodala was instrumental in the victory, dropping 14 points and dishing 7 assists. Draymond Green put in 16 points, while Klay Thompson had 12 and Leandro Barbosa came off the bench for 13.

LeBron James continued to make a case for the NBA Finals MVP in a losing effort, putting up another triple-double highlighted by his 40 points. James was responsible for most of Cleveland’s offensive output, with a whopping 70 points involving “The King.” Nearly averaging a triple-double in the series, James might become only the second NBA Finals MVP on a losing team. But in his postgame press conference, James told reporters he still liked his team’s chances and that he feels confident because he’s “the best player in the world.”

But as amazing as LeBron has been, his supporting cast hasn’t done much to help him in the past two games. Tristian Thompson had 19, but J.R. Smith and Iman Shumpert were both cold from the field and didn’t help the Cavs’ offensive effort. Cleveland’s breakout star and fan darling Matthew Dellavedora had an awful night on both sides of the court, scoring just 5 points and allowing Steph Curry to go off as a result of his poor defensive play.

The NBA Finals will move back to Cleveland for Game 6 on Tuesday. Should the Warriors win, they will clinch their first NBA Finals victory since 1975. A Cavs victory will force a Game 7 back in Oakland on Friday night. Tip-off for both games will be 9 pm EST.