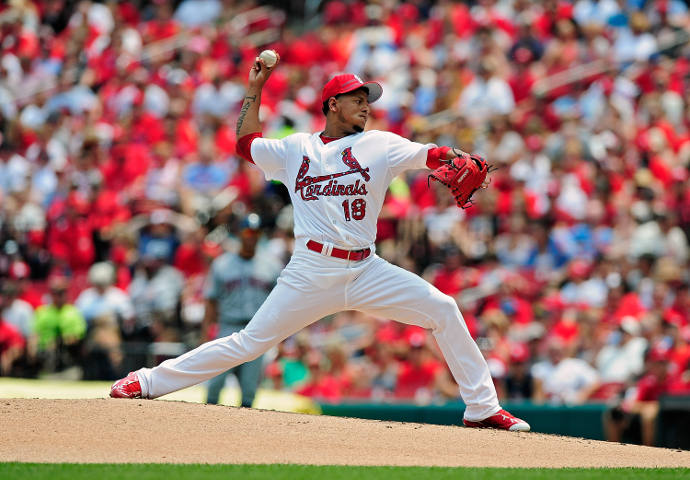 Saint Louis Cardinals pitchers, Carlos Martinez and Michael Wacha, are two young and dynamic pitchers that management sees their future in, so they have minimized their innings in order to preserve their arms. However, after a 4-3 win over the Pittsburgh Pirates on Tuesday, they may be changing the way they are using their young guns.

Cardinal manager Mike Matheny saw that Martinez was disrupting the Pirate battling lineup, causing “awkward swings,” so he left him in. When asked about his decision, he stressed the want to need and his faith in the 23-year-old Martinez.

“The potential win supersedes anything we have in place right now,” Matheny said. “Right then we needed our best pitcher, and to me he was the best pitcher we had for that situation, and I think he proved that.”

Even Martinez’s teammates acknowledge the young pitcher’s play, and they seem to enjoy the excitement he is creating for the team. Cardinals second basemen, Kolten Wong, had no reservation about what he thought about the Martinez, saying, “Carlos did what our pitching’s known for. We’re facing some good pitching on that side and they’re going to face our best pitching. It’s exciting.”

Martinez, who is currently at an impressive 12-4, began the game slower than usual, throwing off speed pitches which resulted in multiple singles in the first third and fourth. However, he picked it up his game afterwards with a three run fifth inning. This game tied his career high innings, eight strikeouts with one walk, and one runner allowed in scoring position during his last three innings.

When asked about his amount of play-time, Martinez said that he was itching to continue his streak.

This game had 41,273 people in attendance, which is a 24 game low number for the Cardinals, who attribute this to many students in the area heading back to school.