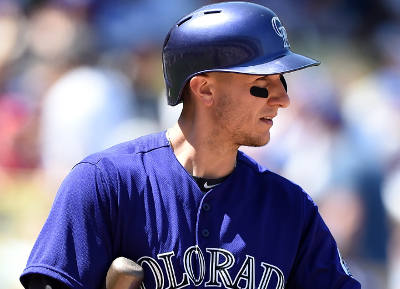 LOS ANGELES, CA - APRIL 19: Troy Tulowitzki #2 of the Colorado Rockies at bat during a 7-0 loss to the Los Angeles Dodgers at Dodger Stadium on April 19, 2015 in Los Angeles, California

Unexpected trades end up beneficial or useless, and the Blue Jays are hoping that it is the not the latter, as Blue Jays general manager Alex Anthopoulos is allegedly sending the veteran shortstop, Jose Reyes and a trio of minor-league prospects to the Colorado Rockies in return for the five-time all-star shortstop Troy Tulowitzki and reliever LaTroy Hawkins. While the deal has not yet been officially announced by the clubs, both teams see potential benefit in the trade.

While the Blue Jays are set to receive Hawkins, the prospects that are Colorado received are highly praised righties Jeff Hoffman (the Jay’s 2014 first round draft pick) and Miguel Castro ( 2012 international free agent) as well as Jesus Tinoco.

While the Jays seemed to be targeting a starting pitcher, the deal is a win-win, as Tulowitzki is widely considered one of the best offensive shortstop in the major leagues and he is merely adding more butter to a roll of the highest scoring lineup in the bigs. He is currently hitting a .305 this year complemented by 12 homeruns, and since his arrival to the league in 2007, no other shortstop has been able to hit a higher average or hit with more power. Because of this, he has earned two Gold-Glove awards.

The only downfall to this seemingly unfair trade is the fact that both traded shortstops are prone to injuries and are owed significant sums of money for their long term deals. Tulowitzki alone is owed more than $100 million over the next five seasons. And he has averaged a mediocre 120 games since his rookie season due to injuries sustained while playing in the stress of Colorado’s high altitude.

Reyes provided the Jays with solid energy output, and was an above average as lead-off hitter, but he is considered among the weakest defensive shortstops in baseball – he made several crucial errors already this season.

While the 42 year old Hawkins will take the place of younger prospects, he is will be a free agent at season’s end. He gas a 3.63 ERA in 22.1 innings this year.