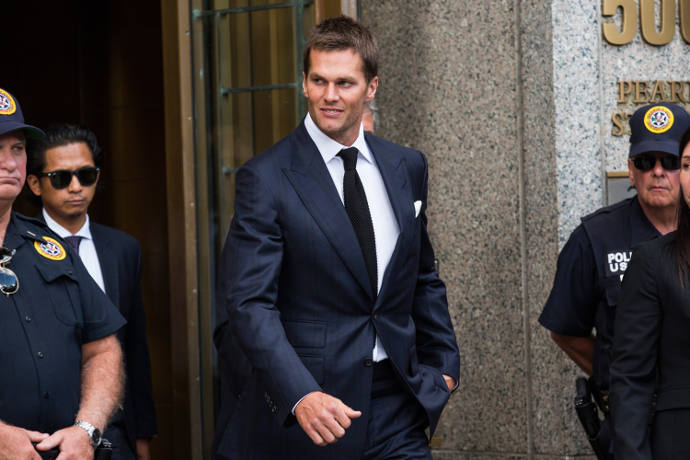 ew England Patriots quarterback Tom Brady leaves federal court after appealing the National Football League's (NFL) decision to suspend him for four games of the 2015 season on August 12, 2015 in New York City. The NFL alleges that Brady knew footballs used in one of last season's games was deflated below league standards, making it easier to handle. (Photo by Andrew Burton/Getty Images)

Perhaps the legal system should employ better artists, or at least just start using pictures. In a recent release of New England Patriots quarterback Tom Brad’s appearance at Federal Court, his likeness was hard to locate.

This is no doubt the worst sketch of Tom Brady ever created pic.twitter.com/mFuHjfF3kS

While the Deflategate scandal was quite buzzworthy, his courtroom sketch has set the internet off – laughing of course. The original sketch can be described as looking more as a Picasso based still rather than a captured still, but it is hard to make out anyone in the piece. While the likeness of Brady is being critiqued, look at the man in the blue suit to his left, and the two behind Brady, they don’t even have faces.

In an interview with the Boston Globe, sketch artist, Jane Rosenberg has voiced out her feelings about her piece. She said, “Tell Tom Brady I’m sorry I didn’t make him pretty enough. He’s very pretty. I’m getting bombarded with calls and emails, I haven’t digested it yet. I know it’s gone viral. It’s kind of funny now, I may feel sad later, but right now it hasn’t sunk in. I know I don’t tend to flatter people.”

But don’t be too hard on yourself, your art has inspired quite the following.

Most popular meme may be Mount Rushmore with Brady sketch, MJ, Guy Fieri and the mask (?): https://t.co/D145zCkvXA pic.twitter.com/jAa4HWVrRc