Sweet 16 Set After Weekend Action in the NCAA Tournament - uSports.org 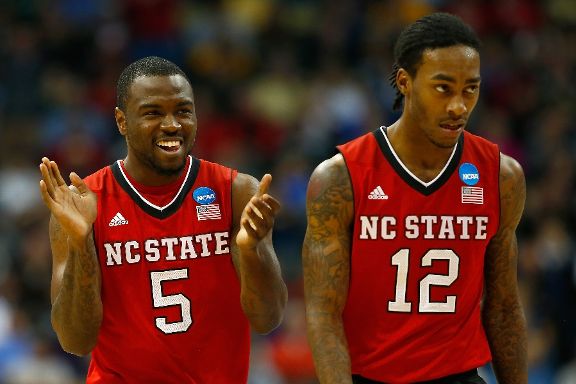 Sweet 16 Set After Weekend Action in the NCAA Tournament

The regional semifinals are all set in this year’s NCAA Tournament after the completion of this weekend’s Round of 32 (known by the NCAA as the Third Round but much more commonly referred to as the Second Round by fans). Although many familiar faces won over the weekend, there were still a fair share of upsets across the board. The weekend’s action also didn’t disappoint, as a number of games went down to the wire.

To little surprise, Kentucky is still undefeated and into the Sweet 16. The Wildcats knocked down 8-seed Cincinnati 64-51 to earn their spot into the Midwest semifinals. Their next foe? A pesky West Virginia team that’s known for playing havoc on opposing offenses by forcing a high amount of turnovers. The 5th-seeded Mountaineers did just that against 4-seed Maryland last night, forcing 23 turnovers in their 69-59 victory. The game was close the entire way until Maryland star Melo Trimble went down with a head injury. Without their point guard, the Terps weren’t able to respond to West Virginia’s late run.

Joining the Wildcats and Mountaineers are Notre Dame and Wichita State after they took down in-state foes in the Round of 32. 3-seed Notre Dame won a thrilling game against fellow Indiana school Butler by a score of 67-64. Fighting Irish head coach Mike Brey revealed after the game that he coached just hours after his mother passed away, making the win very emotional for the ACC champions. The 7th-seeded Wichita State Shockers, who are just two years removed from a Final Four run, will make their return to the Sweet 16 after upsetting their state’s blue-blood, 2-seed Kansas, in a 78-65 affair. The loss comes as another knock against Kansas, who has in recent years had a hard time making it out of the first weekend of the tournament when up against mid-majors.

After Georgia State knocked off Baylor on Thursday to ruin many brackets, order was restored to the West region over the weekend. Top seeded Wisconsin held off 8-seed Oregon 72-65 in a game that proved to be a bigger test than many thought for the Badgers. The win sets up a highly anticipated matchup with 4-seed North Carolina, who pulled away from 5-seed Arkansas in the 2nd half to win 87-78.

14-seed Georgia State’s Cinderella run game to an end on Saturday in a loss to 6-seed Xavier by the score of 75-67. Although it does mark the end of the road to Georgia State’s season, the Panthers held their own against the Musketeers and hung close with them throughout the game. Xavier will be the Big East’s only representative in the next round after the win. They’ll face off against a title contender in 2-seed Arizona, who moves on to another Sweet 16 under head coach Sean Miller. The Wildcats took down the 10th-seeded Ohio State Buckeyes in a 73-58 victory.

If order was the theme in the West, then chaos fits the bill in the East. After only one upset in the Round of 64, the top two seeds in the region were knocked out over the weekend. #1 seed Villanova continued their string of opening weekend disappointments by losing to 8-seed North Carolina State in a 71-68 ballgame. The Wolfpack will be the only 8 seed to move on to the next weekend after their inside penetration left the Wildcats’ defense looking for answers. They’ll be moving on to an all-ACC date with conference foe 4-seed Louisville, who was able to pull away in the 2nd half against 5th-seeded Northern Iowa. NC State won the regular season matchup with Louisville 74-65 back in February. However, that game came at a time when the Cardinals were dealing with suspensions and injuries.

The 2nd-seeded Virginia Cavaliers are also heading home after 7-seed Michigan State was able to succeed in their slow-tempo style of play in a 60-54 game. The win comes as another notch in head coach Tom Izzo’s resume as the Spartans will head to their seventh Sweet 16 in eight years. It’s also the second straight year Michigan State has knocked off Virginia in the NCAA Tournament, as the Spartans won last year in the Sweet 16 against the top seeded Cavs. Next on the docket for Michigan State are the 3-seed Oklahoma Sooners, who held off 11-seed Dayton in a closely contested 72-66 game in a very pro-Flyer crowd in Columbus.

With Villanova and Virginia out of the picture, this will be the first time since 2004 a region will not have a 1 seed or 2 seed playing in the Sweet 16.

Duke took care of their business on Sunday, as the top-seeded Blue Devils made easy work of 8-seed San Diego State by a final of 68-49. Awaiting them will be the 5th-seeded Utah Utes, who knocked out 4-seed Georgetown on Saturday night 75-64. The loss was another dubious one for the Hoyas, who have still yet to make it out of the first weekend of the tournament since their run to the 2007 Final Four, even though many of their teams entered the tournament as a top four seed.

To round out the Sweet 16 is a matchup that will be sure to make many sports channels and websites to break out the footage of Adam Morrison’s tears. Gonzaga and UCLA will face off in a rematch of their 2006 Sweet 16 classic after both made easy work of their Round of 32 opponents. 11-seed UCLA eased to a 92-75 victory over the bracket buster 14-seed UAB. 2nd-seeded Gonzaga also did their business and ended a run of disappointing first weekend results by handling Iowa 87-68.

The Sweet 16 will kick off on Thursday night. If you’re looking for a mid-major to root for, Gonzaga and Wichita State will be your two choices. The ACC leads the pack with five of its members reaching the round, while the Pac 12 also managed to put three of their own in. It will also be the first time in almost twenty years that Duke, Kentucky, UCLA, and UNC have all made the Sweet 16, something surprising given the illustrious legacies of the four programs.

Read more about:
College Basketball NCAA Tournament
Listen to the uInterview Podcast!
Get the most-revealing celebrity conversations with the uInterview podcast!