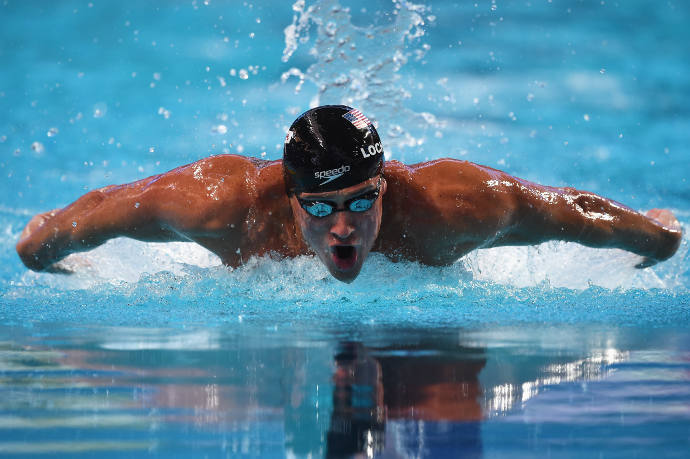 competes in the **** on day thirteen of the 16th FINA World Championships at the Kazan Arena on August 6, 2015 in Kazan, Russia.

With the 2016 Olympic games almost upon us, Ryan Lochte and Katie Ledecky show the world that the United States of America was and still is a powerhouse in men’s & women’s swimming.

Lochte recently became the first man ever to win the 200-meter individual medley back to back four times at the Swimming World Championships. Ledecky on the other hand, rallied a 3.04 second victory over Italy from a 0.34 second deficit from Sweden in the 4×200 meter freestyle.

The 31-year-old Lochte didn’t start his sixth world championship run strong, falling from first to fourth on the last lap of the men’s 200 freestyle. But like the Gold Olympian of the past, he secured a medal for the United States in his signature event, the 200-meter individual medley. His win, second behind Ledecky, make Lochte only the second American to even win an individual gold medal at the competition.

Lochte, who set the world record in 2011 at 1:54:00, said that he was humbled over his victory, and of his record – this time, he clocked in at 1:55:81. However, his win has come with controversy: Lochte pushed and kicked off his back for 10 meters before resuming his freestyle, something not against the rules, but is not employed in the meta strategy.

When asked about how the critique will impact his swimming, he said that, “We’re going to have to call it the Ryan Lochte turn because this is getting a lot of buzz. I’m going to keep doing this turn until I get disqualified, plain and simple.”

Prior to Lochte’s success, the United States women’s team made up of Ledecky, Missy Franklin, Leah Smith and Katie McLaughlin swam winning time of 7:45.37 seconds to beat out Italy’s time of 7:48.41. The win marked the fourth medal that Ledecky had received in the 8 day event.

Hopefully, the United States continue with momentum into the 2016 Rio Olympics.